G’day from hot and sunny (+41C) New South Wales! It’s been a very busy week with a new host everyday and about half of my speaking engagements completed. Only five more to go! I’ve had a great time looking at tomato and grape harvesting along with rice, corn, cotton and almond production. It’s always interesting to see the differences between our crops and climates and yet share the same challenges like water, labour, timeliness, succession planning, and crop establishment. I’m finding more similarities in Australian and Canadian crop production than differences.

It sounds like North America is in a bubble of logistical transportation issues, which may lead to increased fertilizer prices and short supply by spring. In planning for next harvest, I’m looking at purchasing a grain bagger or temporary storage to take the pressure off of slow movement next harvest.

This week we’ll look at an odd concept of deep banding manure that has yielded some tremendous results in sodic clay soils. Next, we’ll look at the importance of storing moisture at depth. Last, I’ll came across a portable moisture, protein and oil content tester that is half the price of the options on the market. We’ll finish with technical grain market news.

Pictured above: A Case IH’s 7230 combine with bi-fold auger that unloads on 40ft CTF system, owned by Jason Coleman and family. Temora, NSW.

I recently listened to an interesting presentation on the impact of deep banding manure in sodic soils. As we know, sodic soils have high sodium levels and clay content in the subsoil, high pH and poor physical soil structure. When sodic soils wet up, the clay particles disperse in water and seal off the soil. When the soil dries out it turns to cement. Alberta alone has millions of acres of sodic soils, mainly on the east side of the province. For more on sodic soils go here.

Dr. Peter Sale, researcher from La Trobe University in Melbourne, Australia led a project that looked at deep banding organic amendments like alfalfa pellets, chicken manure and inorganic amendments like gypsum, sand and MAP in sodic soils. The products were banded with a deep ripper down to 30-40cm at rates of 10-20 T/ha (4-8 T/ac) on 32-inch row spacing. The deep ripper had pipes mounted to the back of the shanks where amendments were metered from a box above (see photo). The results of this study were nothing but impressive!

These are a few results:

Here is the presentation that shows the results of their trials including economics.

There were several other trials that I’ll summarize in a quote from Peter Sale.
“The yield increases in the subsoil-manured crops in 2012 were around 2 t/ha of canola at one site, more than 4 t/ha of wheat at each of the 3 wheat sites, and 2.7 t/ha at the faba bean site. Over the 8 years of subsoil manuring research, we calculated that the average yields for wheat crops, for 12 site x season combinations, was 5.8 t/ha for the commercial crop and 9.3 t/ha for the subsoil-manured crop, which represented an average yield increase of 60%.”

Highlights from the 2005-2012 trials: The initial cost of subsoil manuring is very expensive at roughly $500.00 AUS per acre. That said if you can generate an average 60% yield increase, depending on you current yields, deep banding manure could provide a quick return. The next step is to find a way to refine the process of deep banding manure so it can be applied faster and more efficiently. Currently, machinery can cover roughly 1.4 acres an hour. Trucking costs and sifting manure to regulate size takes time and is a large portion of the expense.

I will be watching to see how the Aussie’s refine this process. If we could generate a 60% yield increase, this practice may have some serious potential in Western Canada. To read more on deep banding manure go to our website here and here. SL 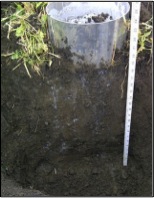 To read the research paper that helped my understanding of water use efficiency, go here, “Impact of subsoil water use on wheat yield”.


The following points are highlights I pulled from the research paper: I’ve mentioned in previous newsletters about the importance of lowering soil bulk density through controlled traffic farming and how we’ve doubled and tripled water infiltration rates on the CTF versus Random traffic field scale trials. On our farm, a few inches of moisture can move down 1.1M in less than 24 hours. This research shows that subsoil moisture can generate 3 times more yield during grain fill stage than surface soil moisture. When you hear of CTF farms tripling yields in during drought years compared to random traffic farms, you can bet its do to the improvement in deep stored soil moisture storage. SL

Photo: White water-based paint used in an 18cm ring to watch water movement down to 1M. This was done on our farm in 2012. 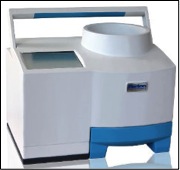 In a post-CWB market, it is extremely important to understand grades, proteins and moisture levels prior to delivery to avoid serious revenue losses or delivery cancellation. Typically we can see protein spreads between $18.00 to $27.00/MT. Worst of all, the protein spreads can’t be guaranteed when you forward contract so we’re all left a little out in the open when it comes to managing protein risk.

The same holds true for malt barley where loads can be rejected at the elevator, forcing you to bring it home or sell it locally to a feedlot at a discount. Either way, it could be time to invest in your own protein and moisture tester. In previous years I’ve look at the Infratec 1241 and Infratec Sophia, which are used by the CGC, CWB and USDA. The 1241 runs between $40,000-$45,000 and the Sophia runs around $20,000 USD.

During my current Aussie visit I’ve found a company called Grain Growers selling the Perten Instruments, moisture, protein and oil content portable tester. This tester meets national standards for grain testing and sells for half the price at $10,000 AUS. It is a rugged instrument designed for use on farm use with an automated dust shutter to ensure reliable, low maintenance operation

Let’s run some numbers on how many loads it would take to pay for each tester if you delivered HRS wheat at 1% lower protein than contracted.

In this scenario you would need to avoid a 1% protein discount at $18 tonne on 12 loads to pay for the Grain Vantage tester and 57 loads to pay for the Infratec 1241. One of the keys to a good risk management program in our market now is to know your protein levels before they hit the elevator. If you had the tester sitting in a truck, you could run a sample in 40 seconds when you unload into a bin or bag. By the end of the field you will have a running total of what you have and you can market your grain accordingly instead of waiting until after harvest to have your grain samples tested. This will keep you one step ahead of the game.

Now, the Grain Growers Perten grain tester is not sold in Canada yet. But! I did talk to them and if you let me know, I bet all my subscribers could get a handy discount if we order together. Just email me at steve@beyondagronomy.com if you like or email the company directly. 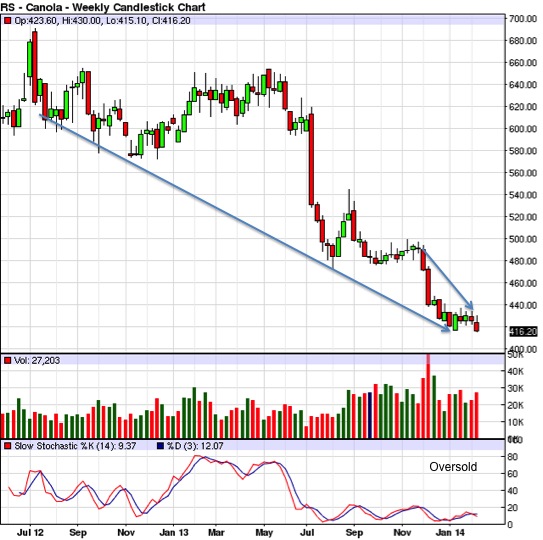 HRS Wheat: Dec 14: The long and short term trends are down. 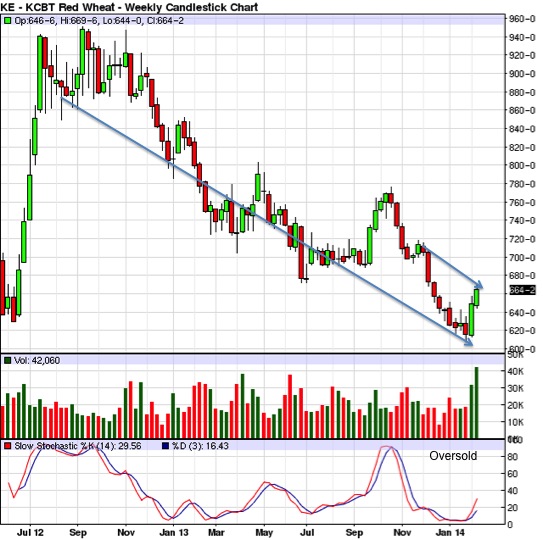 Corn Dec 13: The long and short term trends are down. 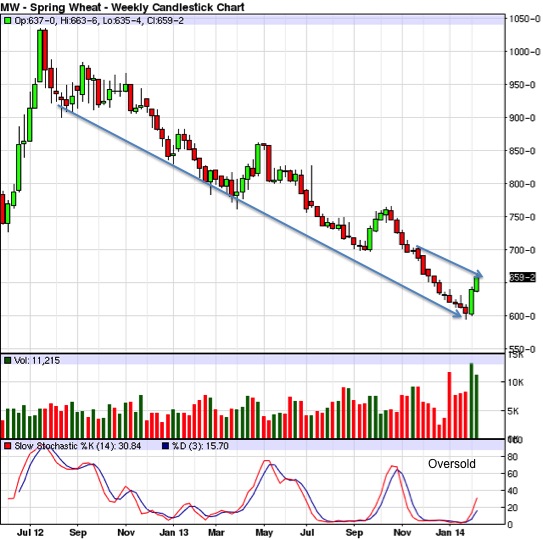 Soybeans: Nov 14: The long and the short term trends are down.

Canadian $: Mar 14: The long and short term trends are down. 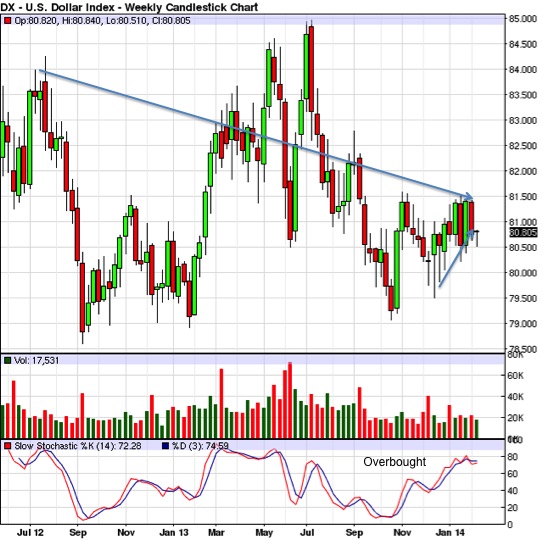