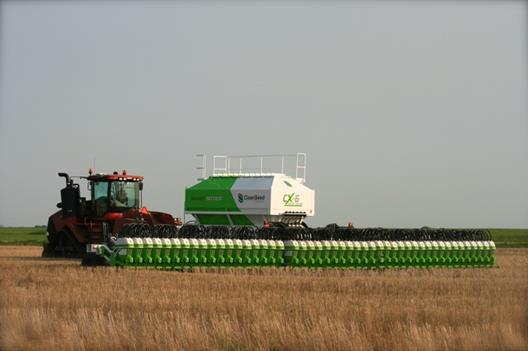 We’ve finally come to a small break in the growing season since the mad dash started in April. Hail and summer storms continue to tear across the area with at least 60% of my clients getting hit; some up to 90% damage across the entire farm. The weather forecast is calling for moderate temperatures in the low to mid-20’s now, which is a welcomed break. The high-20’s and low-30’s weather curbed yield potential on peas and canola this year.

In this week’s newsletter we’ll discuss the significance of split nitrogen applications. We’ll also go through our annual harvest timing predictions and then I'll give an update on a new residual herbicide for cleavers in canola. We’ll finish with technical grain market news.

Pictured above:  The very first CX6 Smart Seeder hits the field to continue with testing. All is going very well with this new drill. 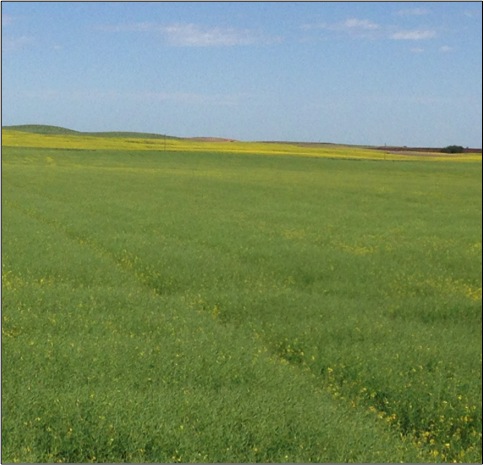 It’s all in the timing

One of the biggest challenges in our direct seeding system is balancing nitrogen rates with maturity. Currently, our business as usual is to apply high rates of nitrogen at the time of seeding. It has worked well in our tight, rapid-fire growing season but we are now coming to a crossroads. Pushing nitrogen rates any further at the time of seeding will only serve to delay maturity and increase lodging. After two years of pushing nitrogen rates between 150-180 lbs/N/ac, (50-80% higher than most), we’ve learned something very important. The key to applying higher nitrogen rates to match higher yield expectations is through split applications and there is no way around it.

In 2013, we applied 90 lbs/N/ac as urea at seeding followed by a side dress nitrogen application of 60 lbs/N/ac as UAN on wheat at flag leaf and flowering. We gained a 23% yield increase in wheat, a 1.8% protein bump from the N application at flowering and there was no delay in maturity. Fast forward to 2014 and the same thing is happening. This time we applied 60 lbs/N/ac as urea at seeding then 120 lbs/N/ac as UAN side dressed at bud stage in canola and GS31 in wheat for a total of 180 lbs/N/ac. As you can see in the photo, the L252 Invigor canola planted May 15th has finished flowering this week, ‘early’ compared to any other fields in the area. In spite of the very high nitrogen rates on this canola, it’s actually further advanced.

Every time nitrogen rates are pushed early, vegetative growth flourishes. The higher the nitrogen pool in the soil, the more time and energy a crop spends producing vegetation. This creates thinner, weak stems, excess tillering and above all delayed maturity. Even with the introduction of plant growth regulators to manage lodging, pushing high nitrogen rates early delays maturity. With a 110-day growing season and many of us already pushing the maturity window, we don’t have much wiggle room to delay maturity any further. Therefore, we’ll always be limited by how much nitrogen we can apply at seeding time.

Split applications of nitrogen are commonplace everywhere in the world except Western Canada. Split applications are used to manage tiller production, increase N use efficiency and reduce risk. The key to avoiding a delay in maturity or increase in lodging is to apply nitrogen at or just before the start of the reproductive phase. That way, nitrogen is used to build yield, not vegetation like we do now. (See a couple nitrogen strategies linked below.)

From our experience, split applications allow us to push nitrogen rates much higher than we ever imagined. A 23% increase in wheat yield with no lodging or delay in maturity after a total of 150 lbs/N/ac could not have been achieved if we applied all of the nitrogen at seeding. I think it’s time for prairie farmers to rethink our nitrogen strategy and start developing efficient and effective split application methods of nitrogen. In my opinion, it’s the most profitable way forward. SL

The recent heat wave has brought crops along quickly and some producers are starting to ask for predicted harvest dates in barley and peas. Now a lot can happen between today and harvest but it is possible to estimate a possible harvest date. Predicting harvest dates by the calendar is very misleading so I use the growing degree-day model to estimate when harvest will begin.

All plant functions, such as evapotranspiration, photosynthesis, water and nutrient absorption and transport, enzyme activity, and other biological and chemical activities are regulated by temperature. For this reason, the development of the crop is more closely related to the amount of heat the crop is exposed to than calendar days. Other factors such as moisture, light (day length), nutrition and variety also play a role, but they generally have less influence.

Let's do the math for wheat, barley and canola seeded near Three Hills, AB, on May 1st. The climate data provided on farmzone.com shows we've received 780 GDD's since May 1st. The average over the last 10 days has been 15 GDD per day, which is about normal for this time of year. To calculate the predicted harvest date for our crops this fall, we'll use an estimated 15 GDD per day, which is typical for the remaining weeks in July and August.

So there you have it. I would encourage you to keep track of growing degree-days to help you estimate swath and harvest timing on your farm this fall. SL

Check out farmzone.com. Find your area and click on "Historical" data.

There has been a serious increase in the number of fields with cleavers and those with moderate to heavy pressure over the last few years. This year I trialed a Group 13, residual herbicide called Clomazone to control cleavers in my Liberty Link canola and was nothing short of impressed.

One of the reasons cleavers are so hard to control is because they grow quickly and become too large to control with Liberty herbicide. Also, the 30-day period after seeding and before a Liberty application leaves plenty of time for cleavers to grow large and uncontrollable.

The photo on top shows one to two whorl cleavers turning white and dying from a Clomazone (135 ml/ac) + glyphosate (1 L/ac REL) application. You can see the same effect on cotyledon stage cleavers that turn white soon after emergence. The photo on the bottom was a glyphosate only application prior to seeding canola and the cleavers were 5 to 6 whorls at the time of Liberty application. The difference at the time of in-crop spraying was remarkable with less and smaller cleavers that required control.

The way I see it, Clomazone + Glyphosate offers a three-way attack against cleavers with glyphosate (Gp 9) and Clomazone (Gp13) applied as pre/post seeding and Glufosinate-Ammonium (Gp10) in crop. In high cleaver situations, Clomazone provides up to 30+ days residual control to alleviate cleaver pressure making your initial and second application of Liberty that much more effective. After seeing the results first hand, I’d say we now have a new tool to battle cleavers in Liberty canola. SL 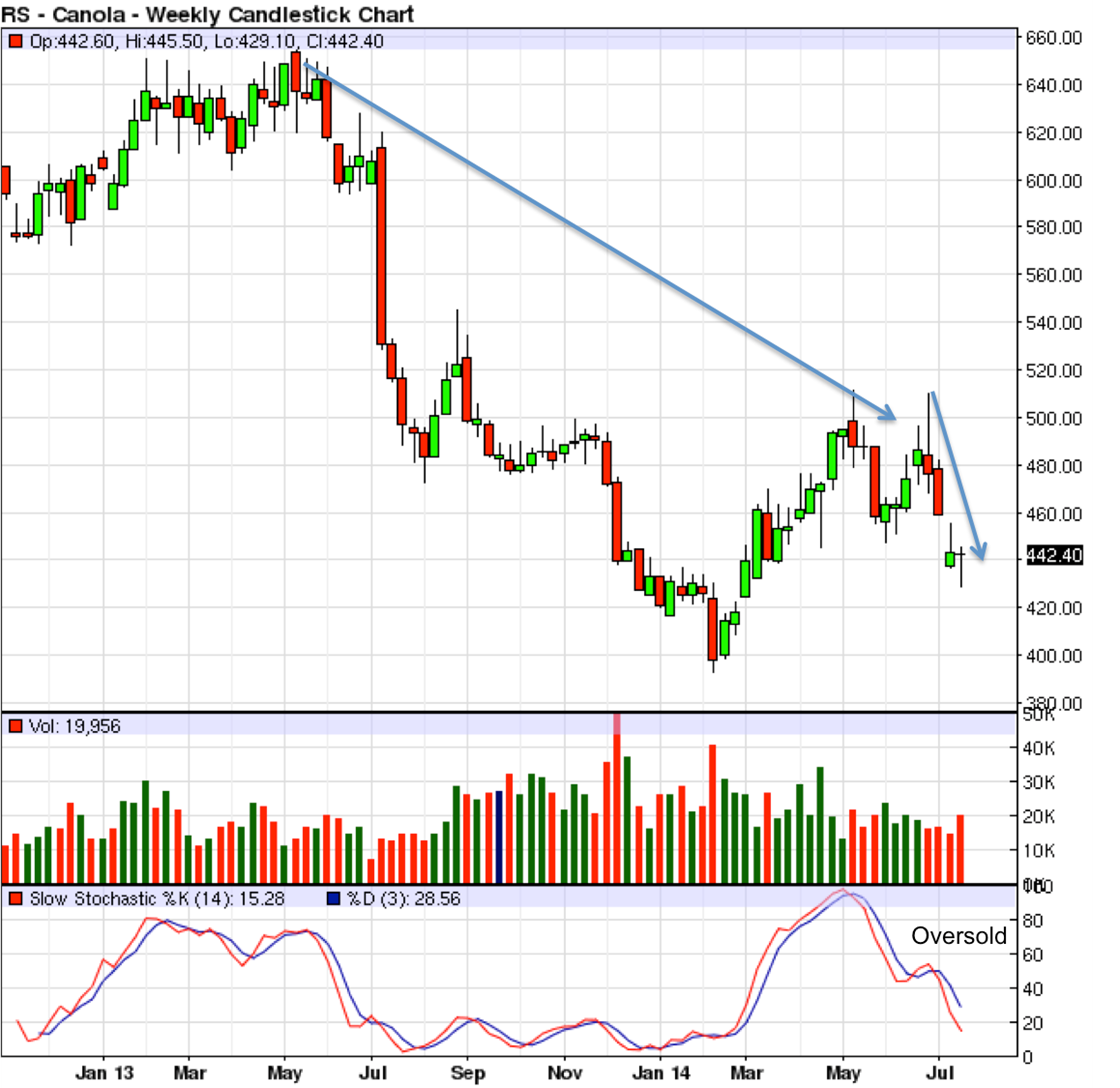 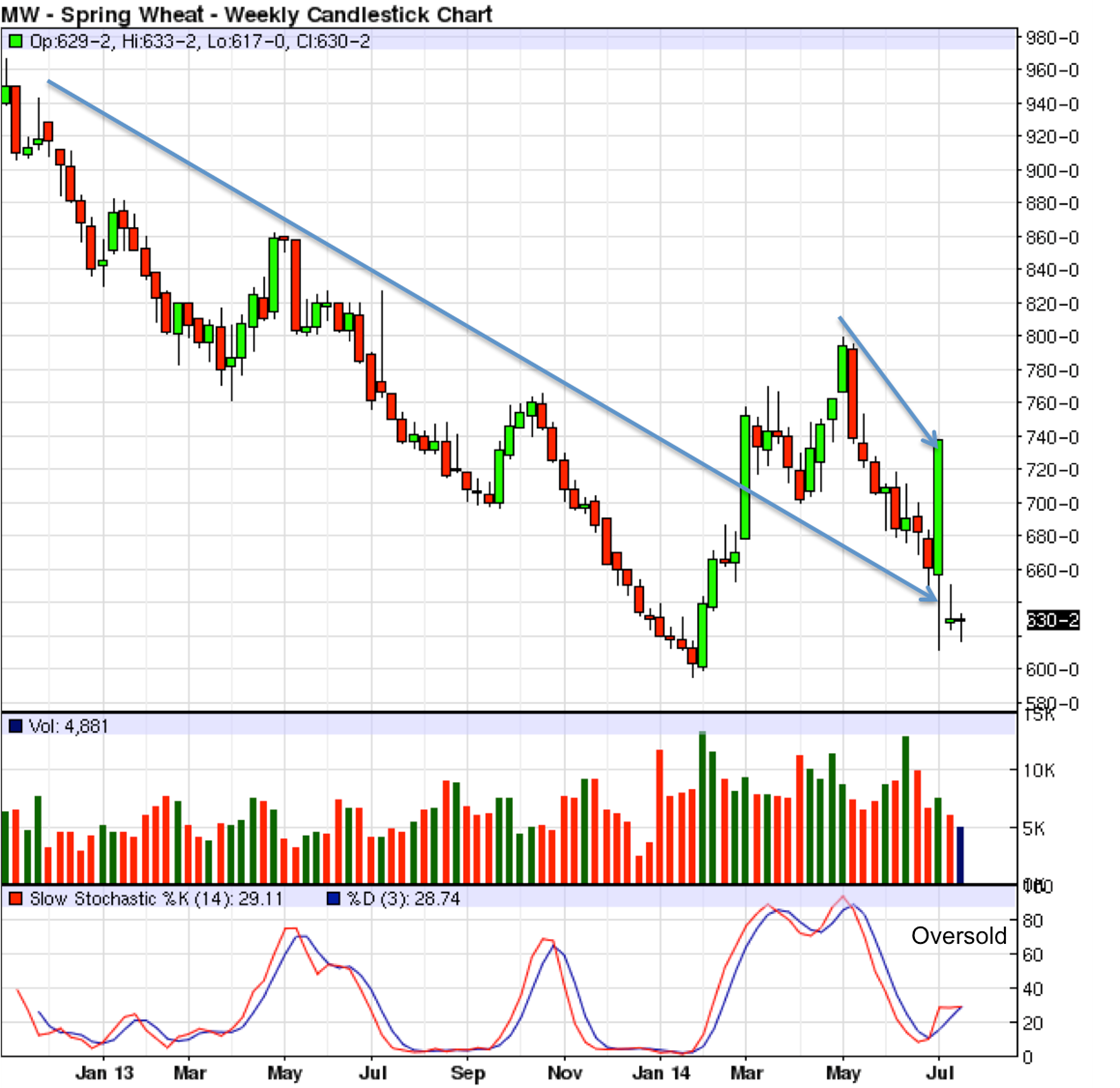 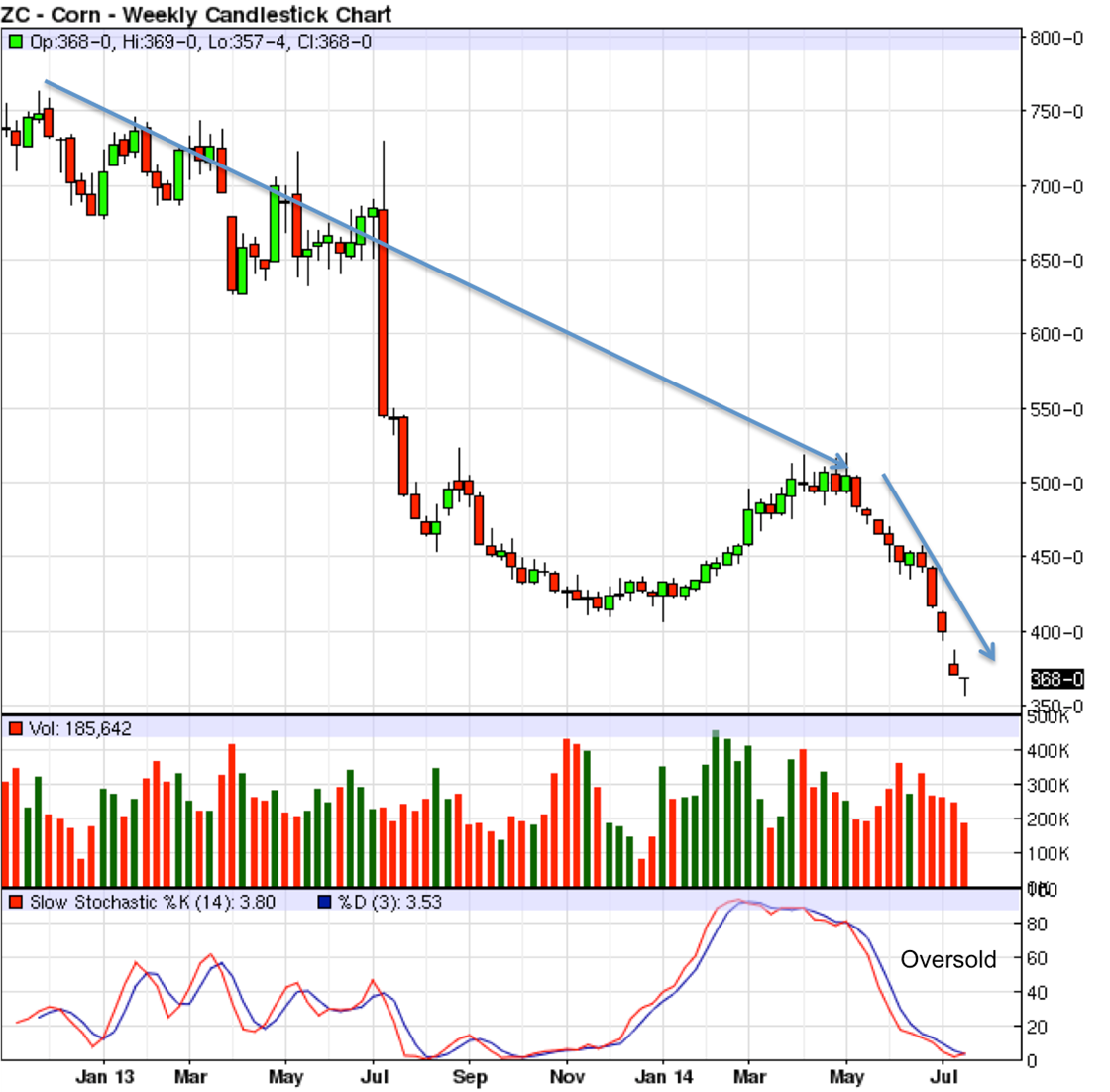 Soybeans: Nov 14: The short and the long term trends are down. 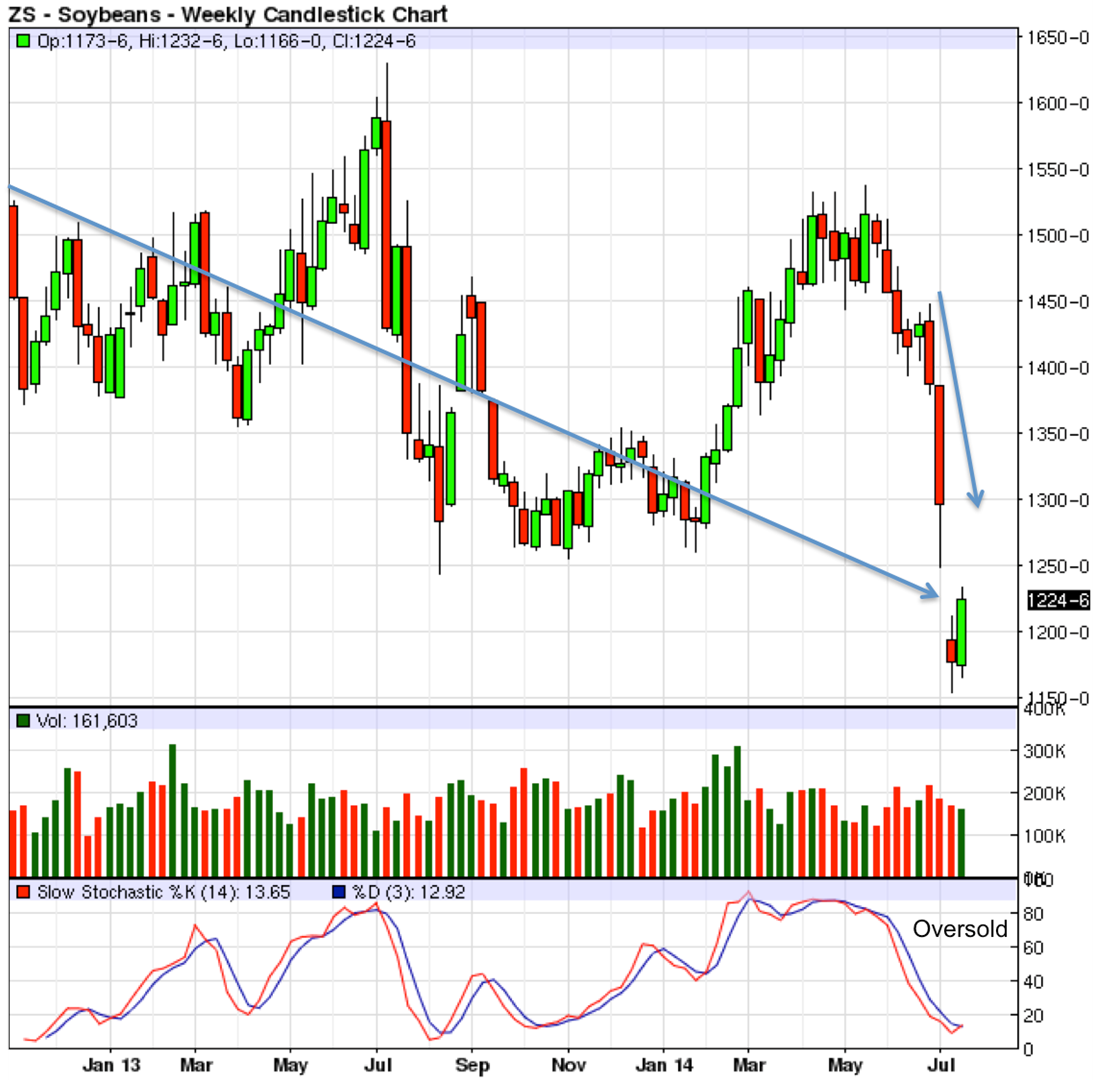 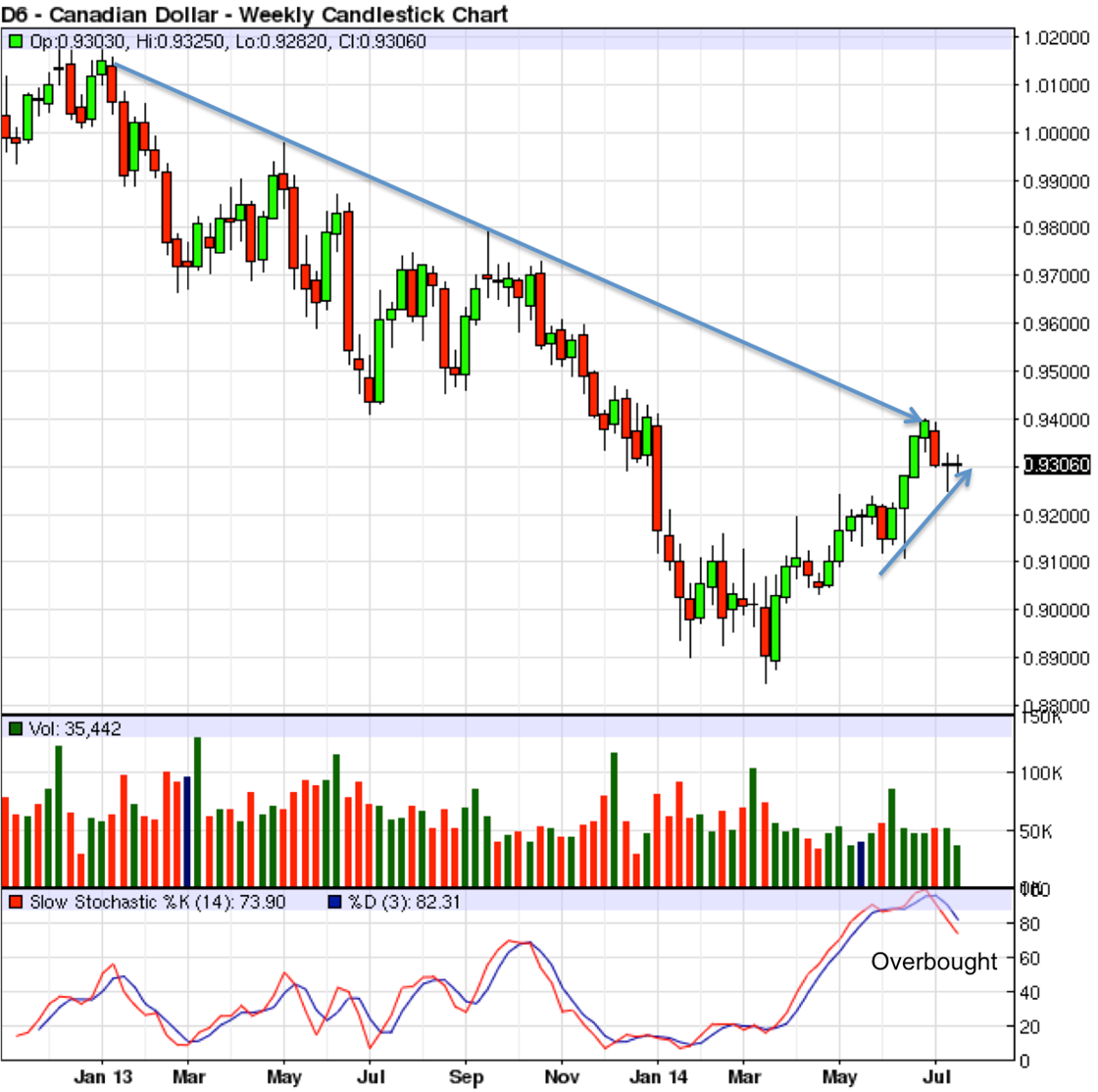