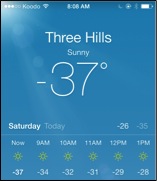 Ah, yes, March. The daylight hours are getting longer and the sun is getting warmer. I’m trying to block out the memories of -37C plus wind chill temperatures over the weekend. It’s a little hard to believe some of us will be in the fields in 60 days.

This week we’ll take a look at canola seed size and its impact on post emergent vigour. Next, I’ve included a handy cereal seed treatment chart to guide you through the maze of products available today. Last, I’ll share some farm data that shows the impact of wheel traffic on yield and gross margins from a producer in Australia. We’ll finish with technical grain market news. 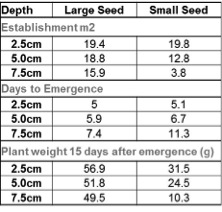 In Western Canada, we’ve been wracking our brains trying to optimize the emergence and establishment of canola to produce higher yields. One of the troubling observations I make each year is the inconsistency in plant size across the field and inside each furrow. It is common to see vigorous plants with big leaves beside plants that are smaller and less robust. Usually we chalk the difference up to root disease, seeding depth, residue, soil temperatures and possibly insects. We never look to the hybrid seed as the culprit but could it be a missing piece of the high yield puzzle?

Recently, I found some interesting and new research from GRDC in New South Wales that points to seed size as the culprit for low hybrid vigour. The research compared large hybrid seed (2-2.4mm) vs small hybrid seed (1-1.4mm). Trials were planted at a depth of one, two and three inches with establishment and days to emergence measured, also the weight of 100 plants were measured 15 days after emergence. See chart above.

There are a number of conclusions we can draw from this trial. First, we know that as you increase depth of seeding, days to emergence and establishment decreases. What’s interesting is the dramatic and significant change in plant weight between large and small seeded hybrid canola seed. The large seed canola plants were twice as large 15 days after emergence than the small seed canola plants. This points to the importance of large hybrid seed and its impact on vigour. It’s one thing to get out of the ground, it’s another to grow rapidly and establish large, healthy plants that continue to capture sunlight to generate higher yields. These findings are consistent with Canola Council of Canada’s research which shows a doubling of dry matter accumulation after 35 days when comparing large to small seed sizes.

Now, we know that seed size varies inside of each bag of hybrid canola seed. Some work by Lacombe Research Station in 2013 measured the variance in seed size inside a bag of hybrid canola seed. They sized the seed with a 5/64ths screen which is 1.98mm. Although the trial found 8% of seed below 1.98mm and the rest above, it never went as far as measuring how many seeds were found at or between 1.98mm and 2.2mm. In Canada, the Canola Council distinguishes small, medium and large seeds based on grams per thousand kernel weight (tkw) not seed size. [Large (3-3.6g/tkw) Medium (2.7-3.0 g/tkw) Small (1.5-2.2g/tkw)]. One can extrapolate seed size in mm from kernel weights but in reality, seed size in mm would be a much easier measurement to use.

Obviously, there are many reasons for poor plant vigour like genetics, fertility, disease, insects and environment but I can’t help but ask the question. If GM seeds like corn and soybeans can be sold by the number of seeds per bag, perhaps canola can follow suit and sell seeds only above 2.2mm in each bag. Research in Canada and Australia show the same results with respect to large seed size and its positive impact on plant vigour. At $60.00 to $70.00 an acre for canola seed, it is crucial that we start with seed that has excellent yield potential from start to finish. SL

The list of cereal seed treatments has grown in the last few years and it’s getting harder to keep them all straight. I’ve attached a handy reference chart supplied by Bayer CropScience that lists the top 11 seed treatments available in Western Canada with actives, groups, container sizes, rates and costs per bushel. The disease ratings were created by Bayer CropScience. I haven’t been able to confirm the science behind the ratings from other manufacturers.

Michael measured yield by weighing a ½ m of row across the 41 shanks on his drill and converted each weight to t/ha. The field was seeded to barley and had 150 mm (6 inches) of rain. To compare high traffic versus low traffic he took the measurements on the first pass of an east headland where half the drill travelled on low traffic ground along the fields edge while the other half would remain on higher traffic ground inside the field. The graph you see above outlines the differences in yield across each row.

When you start adding up yield differences of 43% and gross margin increases of $152/ha ($61/ac) the impact of wheel traffic is hard to ignore. I’ve actually done a similar experiment with a few growers to show the impact of wheel traffic during a dry year. It was also in 2009, the ground was hard as a rock in June and I had my trusty brown probe. I could push the probe down three feet on the outside edge of the field about 10 feet inside. When I walked in another 20 feet I couldn’t push the probe in 3 inches. The only difference between the two areas was wheel traffic.

It’s hard to believe that removing wheel traffic can lead to that great an impact on yield. I can assure you after my travels and research it does, especially during dry years. The absence of wheel traffic increases the soils ability to supply oxygen, nutrients and moisture. Those three key ingredients can generate huge differences in yield when water is scarce. SL 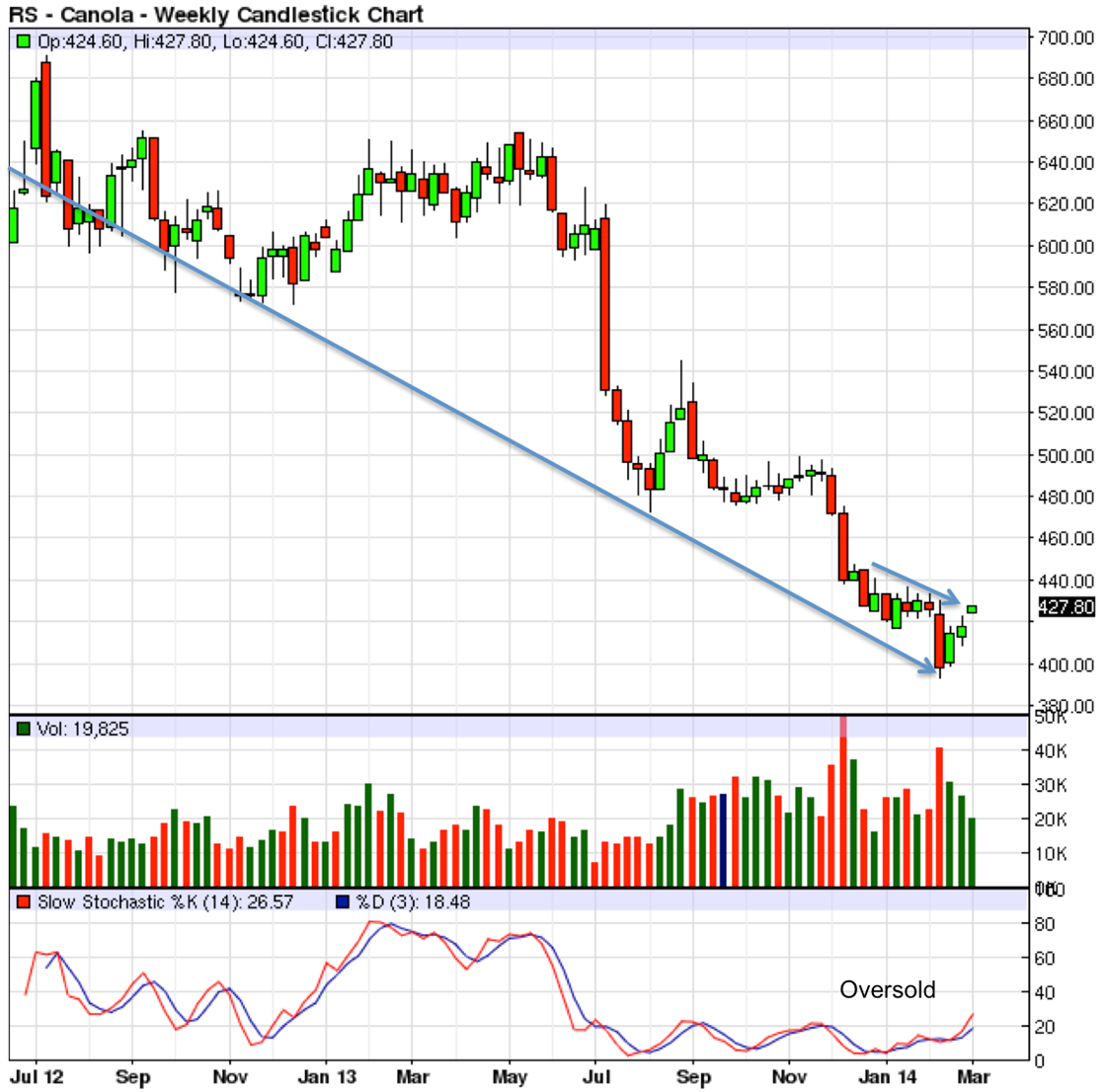 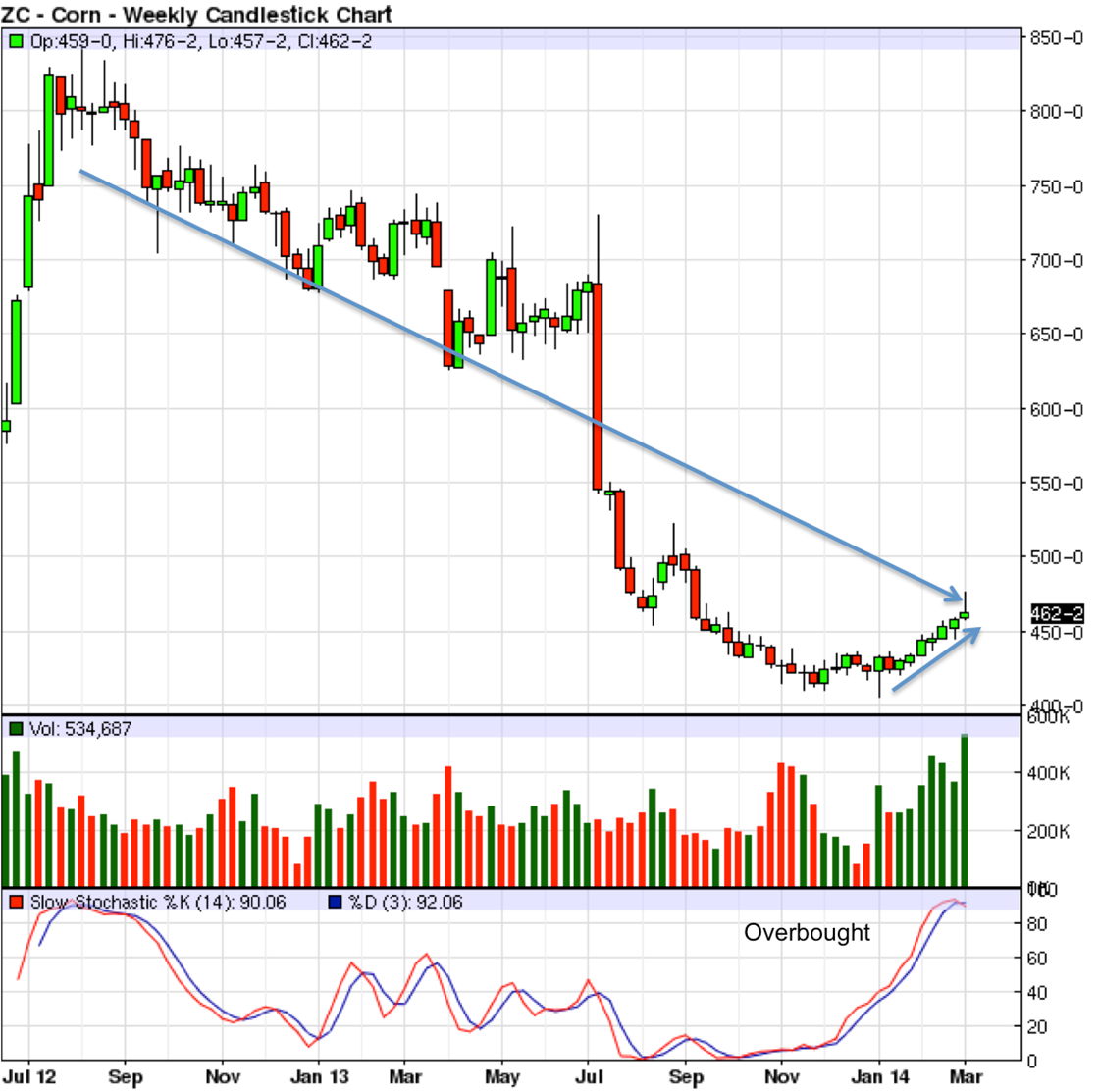 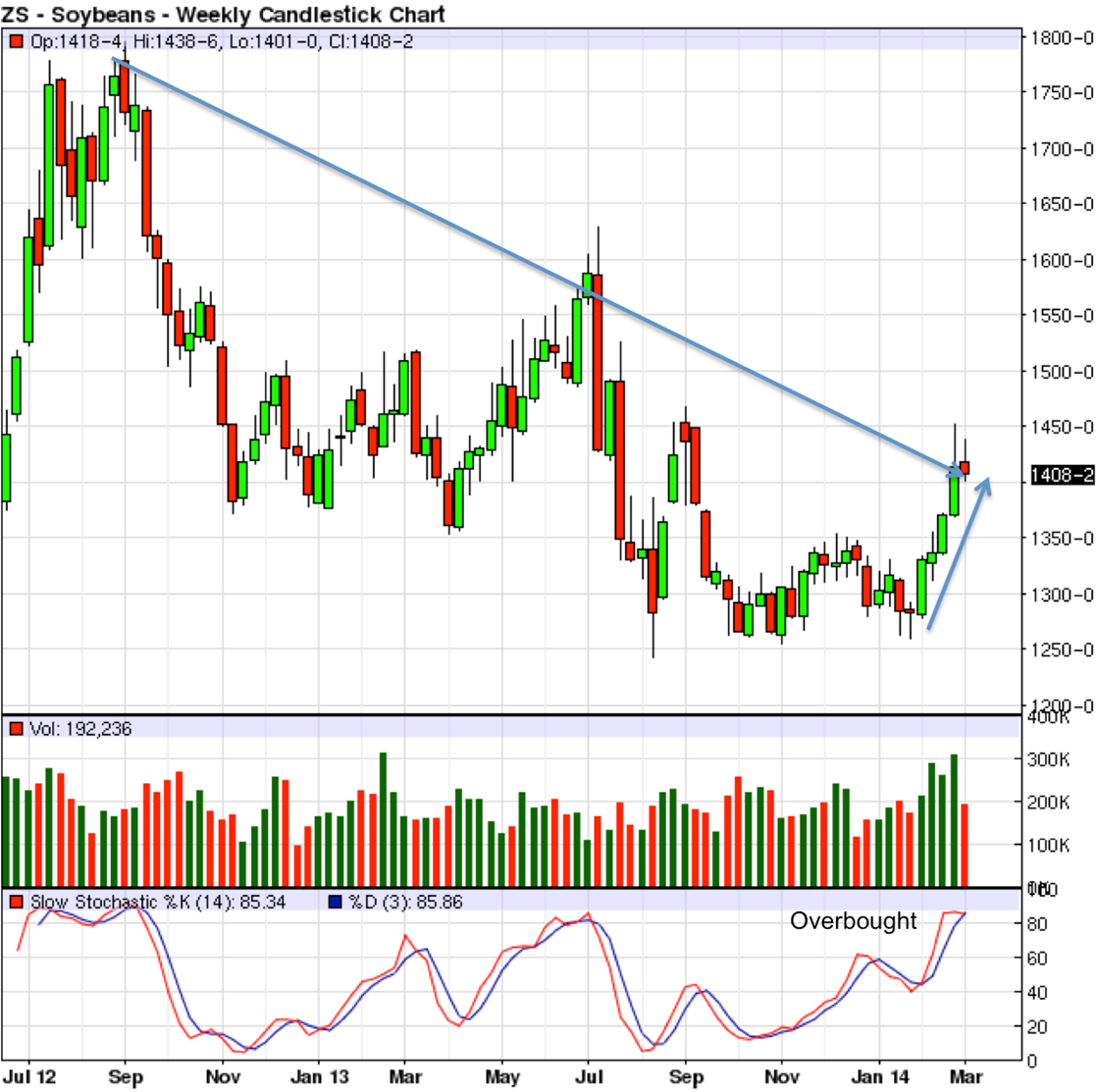 Canadian $: Mar 14: The short and long term trends are down. 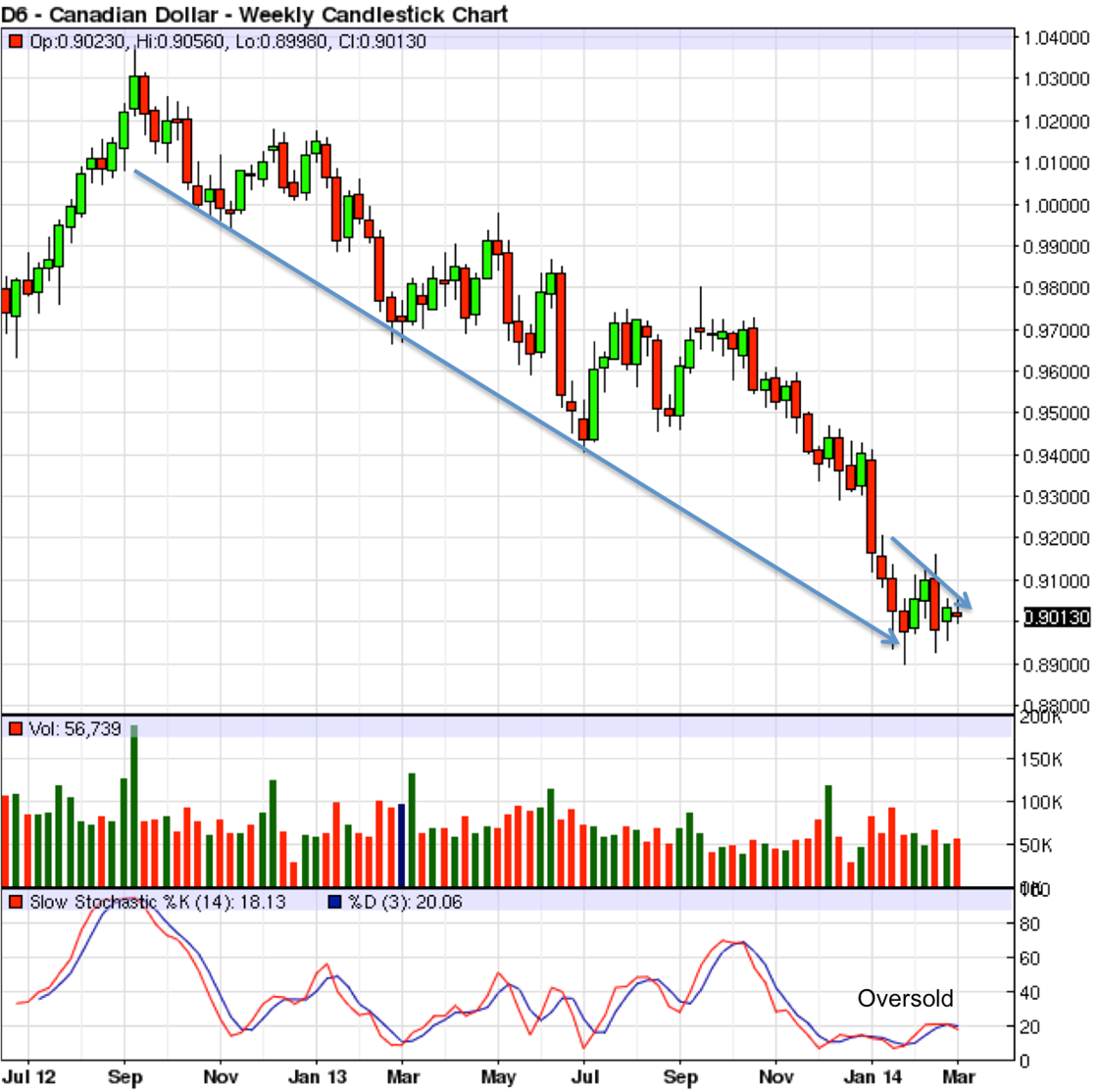 USD: Mar 14: The short and long term trends are down. 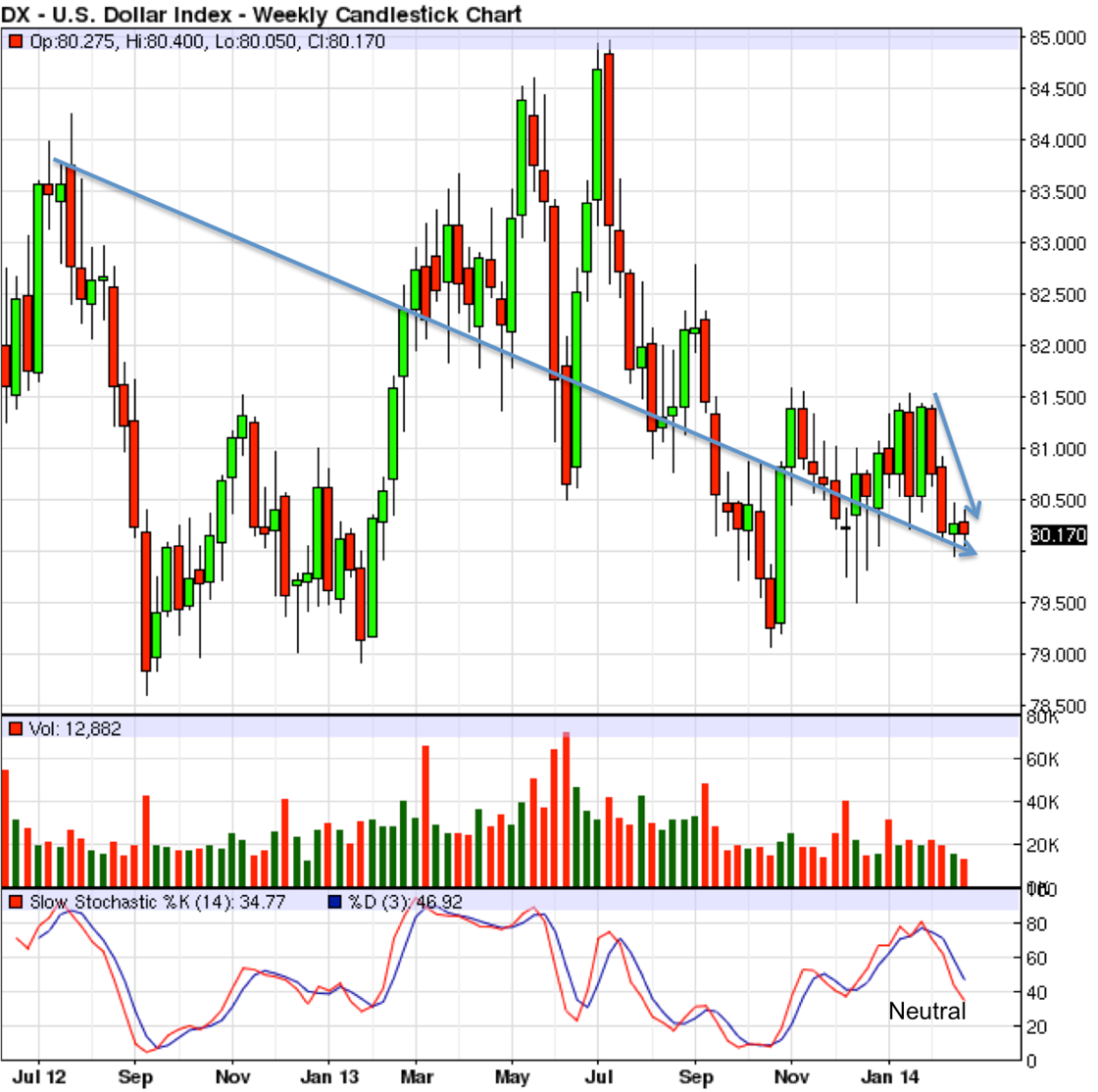