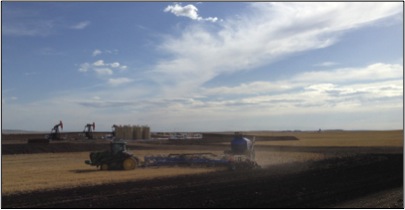 We’ve hit the 90% complete mark with most farms just finishing by the end of the week.  We may have had a late start but early seeded wheat and barley is now in the two-leaf stage, peas hitting 2nd node and canola popping its first true leaf. We are right on schedule with the five-year average.

This week we’ll take a look at the impact of residues on germination and emergence. Next, I’ll provide a handy tank mixing reference to help you remember mixing order. Next, I’ve also included a handy chart you can keep to help you remember optimal water rates and droplet sizes to help achieve optimal performance of our most common herbicides. Last, we'll review the importance of water vapour on germination and checking problem wild oat fields early. We’ll finish with technical grain market news.

Pictured above: Hi Heat Ltd seeding canola in front of a classic Alberta back drop of pump jacks. 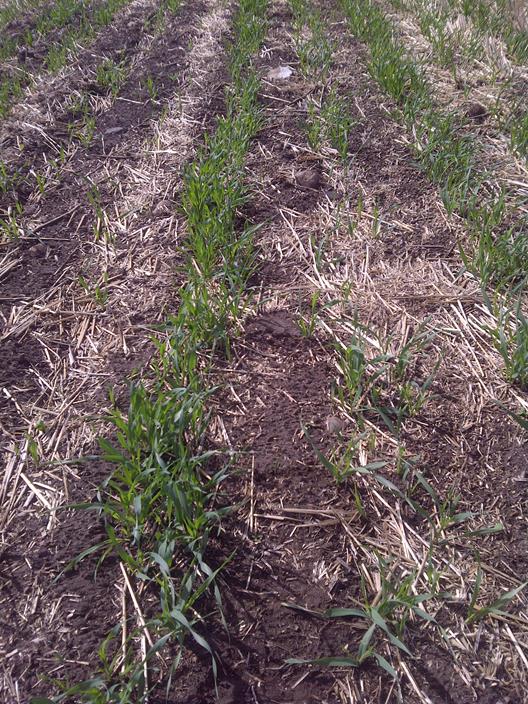 Have you ever looked at a cultivated field and admired how even the crop staging and plant densities are? Nice, uniform rows where each plant has the same advantage as its neighbor. In high residue fields, I typically see up to 30 and 40% of the plants emerge late, they aren’t as vigorous and from the start do not have the same yield advantage as the plants that emerge earlier. The issue in large part is the phytotoxic effects of residues left on the soil under direct seeding systems.

I came across research from Australia in the early 80’s that looked at wheat emergence under wheat, sorghum, canola and pea residue at high 24C and low 8C temperatures. Here is a summary of the research: Link to research paper here.

I think intuitively we’ve always known that residue hinders germination and emergence but have always chalked it up to differences in soil moisture, depth and temperature. This research points to the phytotoxic effect of residues laying on the surface, something we’ve been battling for a long time. At the same time we can’t ignore the positive effects that high residue systems have garnered with improved moisture, nutrient use efficiency and ultimately yield.

We’ve made significant yield gains through direct seeding and I see so many people going backward by reintroducing excessive tillage. Instead of going back to full tillage systems or band-aid vertical tillage systems, we should be looking to a solution that maintains residue cover and standing stubble but removes or pushes residue away from the furrow.

Here are a few examples of what some producers including myself are doing to keep standing stubble but remove it from the furrow. In the end, we know that residue is a concern and we know it creates germination and emergence issues. If you could build a system that combines the benefits of low residue in the furrow and high residue between the furrows, you’ll have a winning combination. I’d be interested to hear you thoughts. I know it can be done. SL

One of the most frequent questions I get asked is how to mix herbicides and in what order to mix them. In fact, I had a quick reference app made to streamline the process for us in Western Canada. See here.  Another way to remember proper mixing order is to remember the acronym WALES. Here are some basic rules that I've adapted from a recent DuPont bulletin to help guide you.

The reason you add wettable agents like granulars and powders is to make sure they disperse and dissolve in water before they become coated with oil from soluble liquids, which is next on the list. Then you add liquid products that are the most compatible with water followed by the least compatible. Last, you add surfactants and anti-foaming agents. 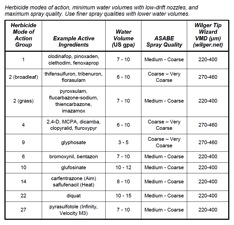 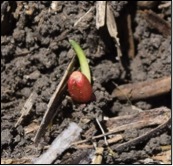 In a recent article, I discussed the importance of water vapour and its role in germination versus the commonly held belief that seed to soil contact is most important. Further to that, Daryl Chubb of DeNovo Ag sent me a photo illustrating the role water vapour plays in seed germination.

Daryl’s photo shows a wheat seed laying on the soil surface with just 20% of its surface area touching the soil. With recent rains and high humidity levels this seedling has established nicely in spite of being stranded on the soil surface.

When it comes to packing systems, it’s important to understand that over packing has created more problems with germination and emergence than under packing. Creating a firm layer of soil above the seed is paramount to capturing the small amount of water vapour needed to trigger germination. SL

There were a few fields with patchy wild oat pressure in my travels last week and it prompted some spot spraying in a few areas. The plants were at the one-leaf stage, the perfect time to catch them before they start to rob yield. Leaving those areas for 10 days to reach the normal in-crop herbicide timing could have created a small disaster.

Research by Alberta Agriculture suggests when wild oats exceed 20 plants per ft2, tillering in wheat can be reduced by 50%. Remember that tillers account for 50% of your yield in spring wheat. Research by Arysta LifeScience pegs nitrogen loss at 1.2 lbs/ac when wild oats are at the 1-leaf stage. If you wait until the 6-leaf stage to control wild oats, you’re looking at a nitrogen loss of 16 lbs/ac in the affected areas.

There are several grassy herbicides on the market that can be used at the 1-leaf stage in wheat, barley, canola or peas:

NOTE: Be sure that temperatures don’t fall below 5 degrees Celsius the night before spraying to avoid crop injury. SL 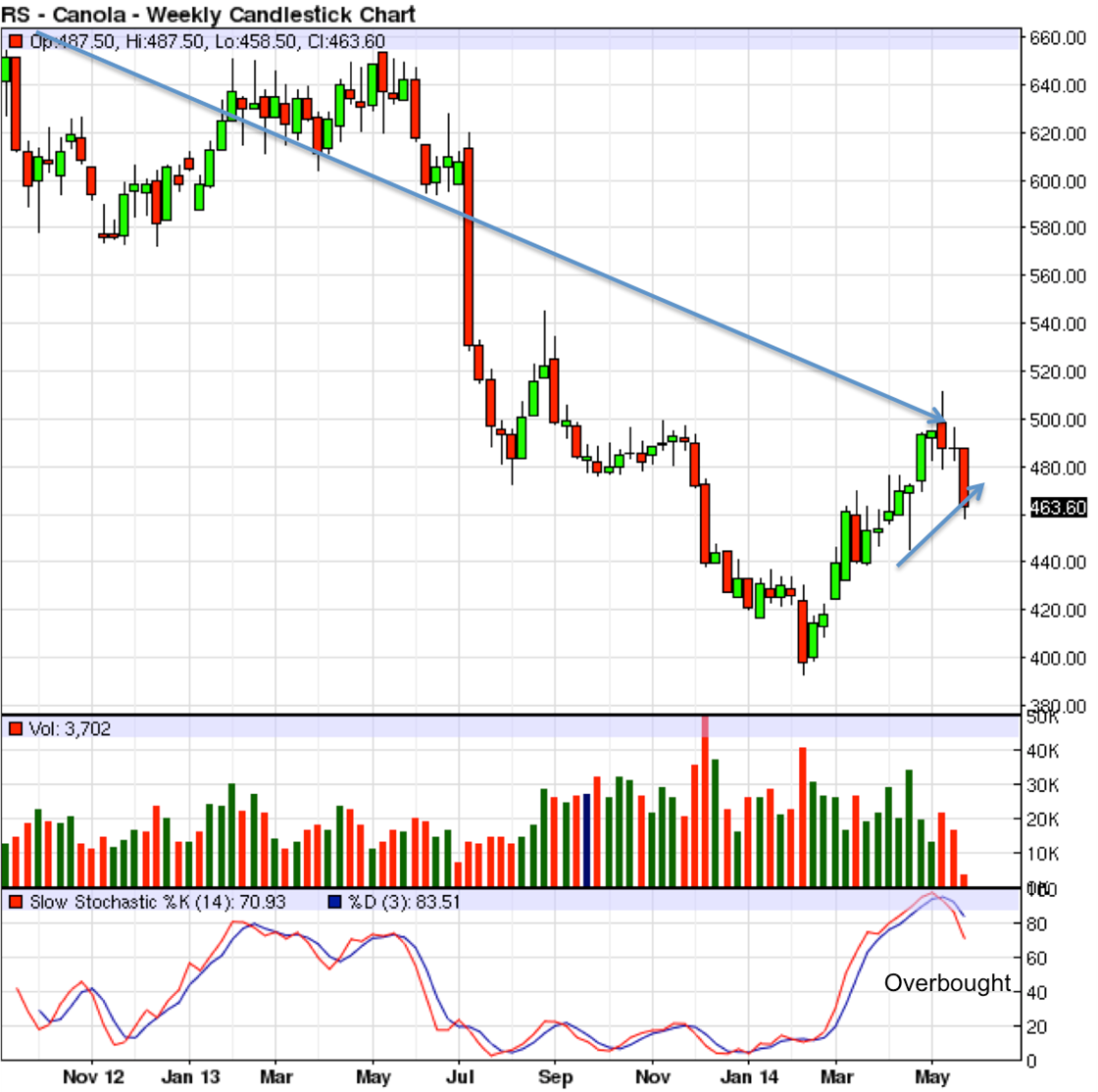 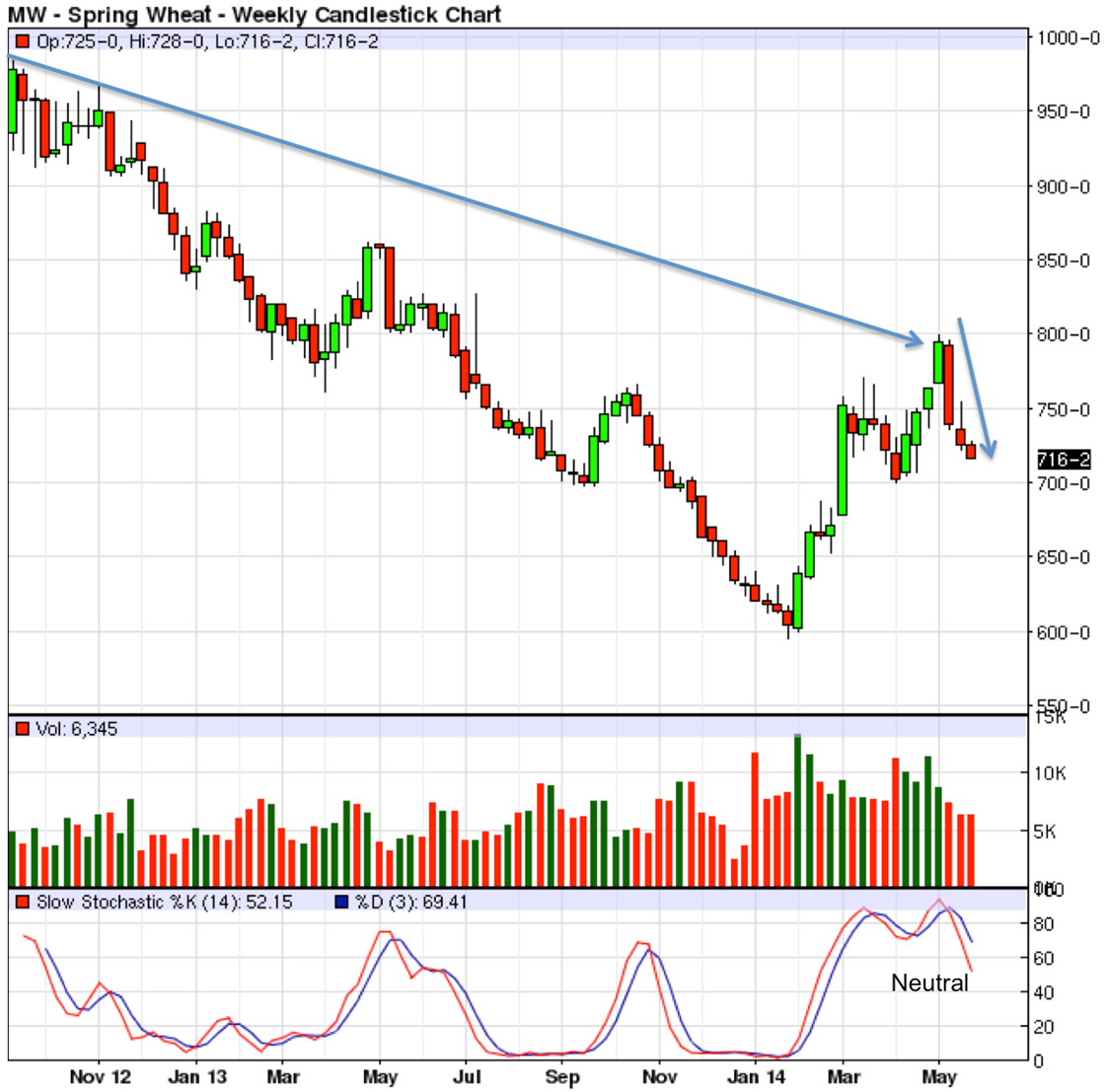 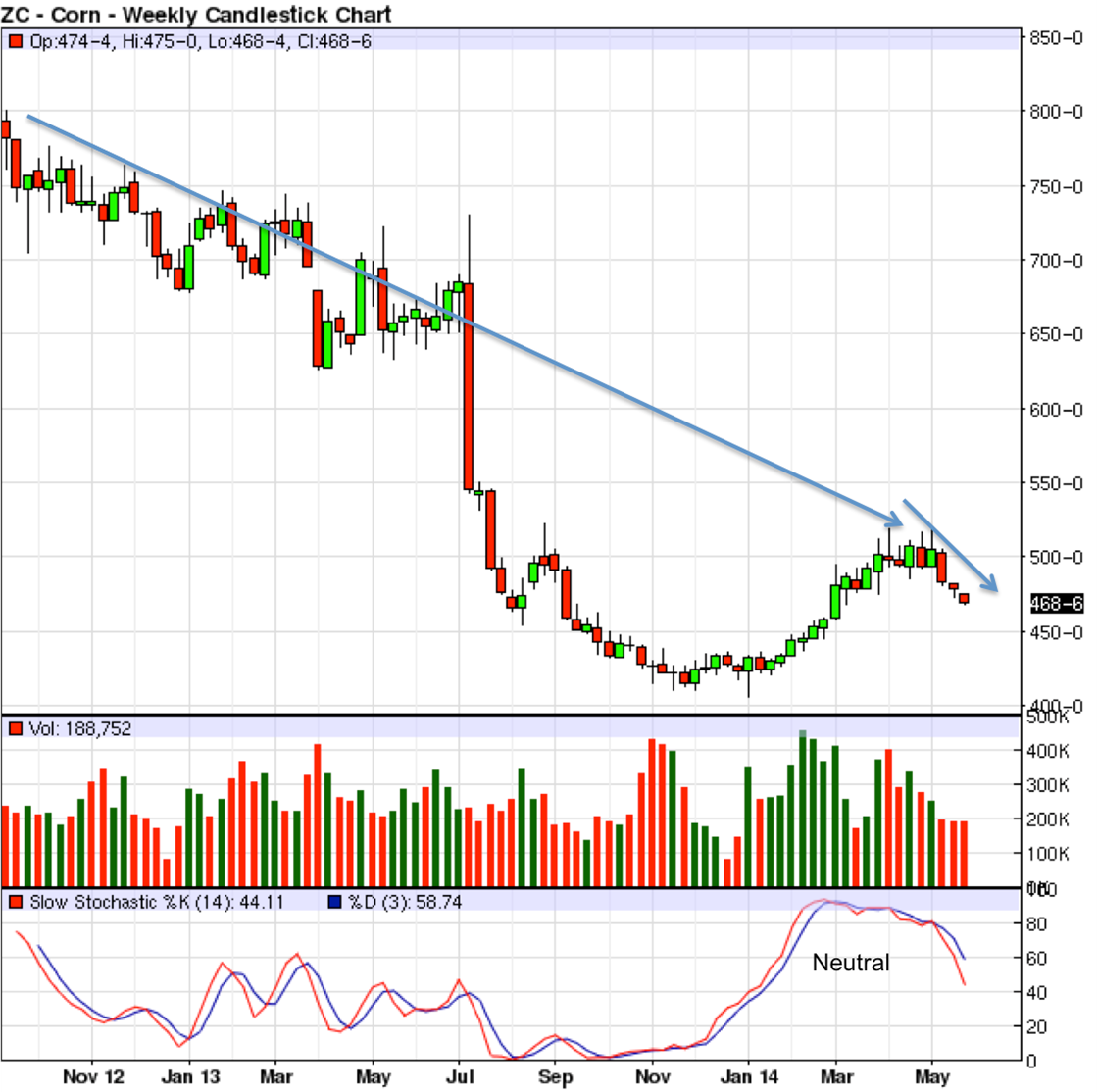 Soybeans: Nov 14: The short and long term trends are down. 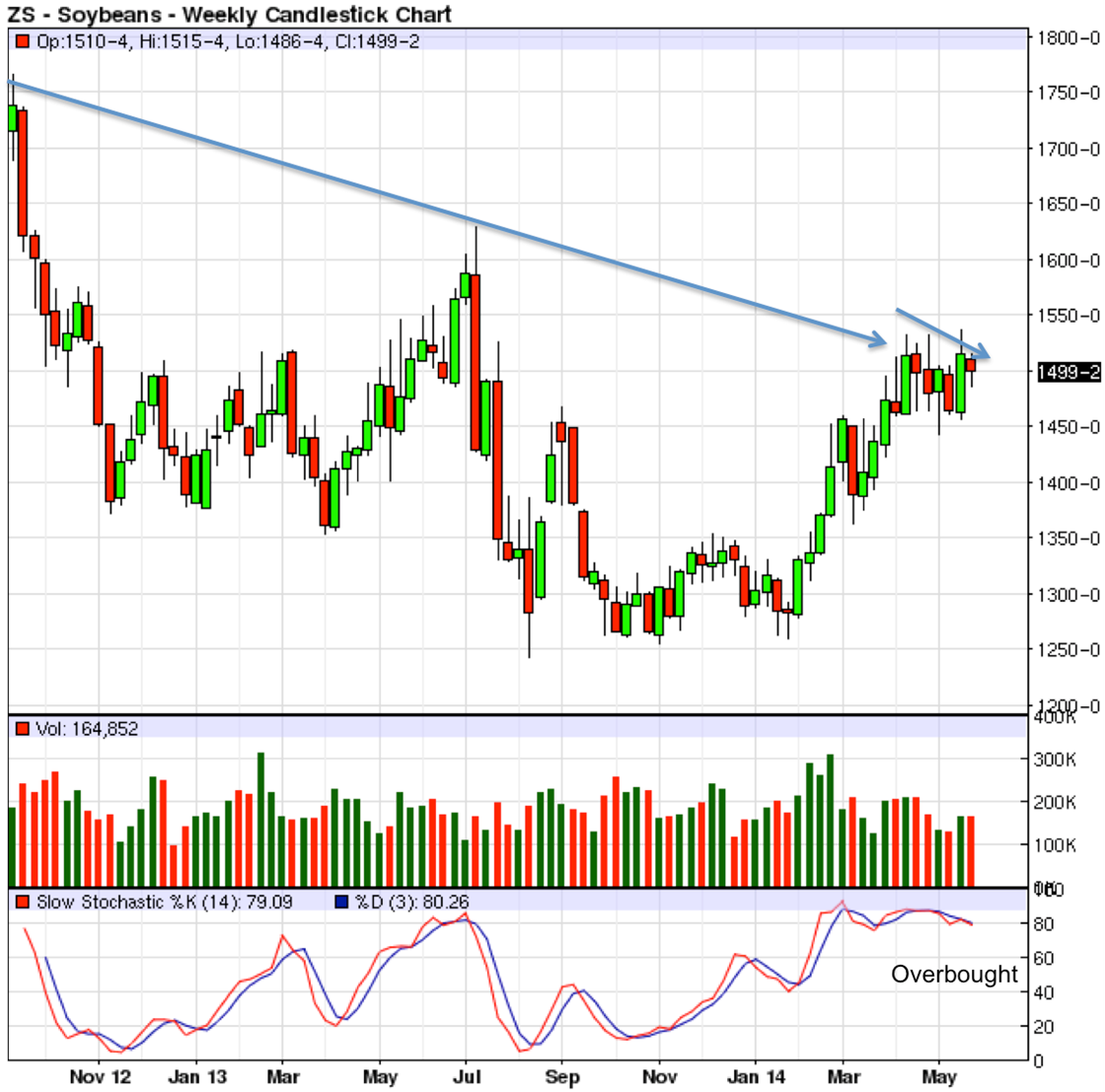 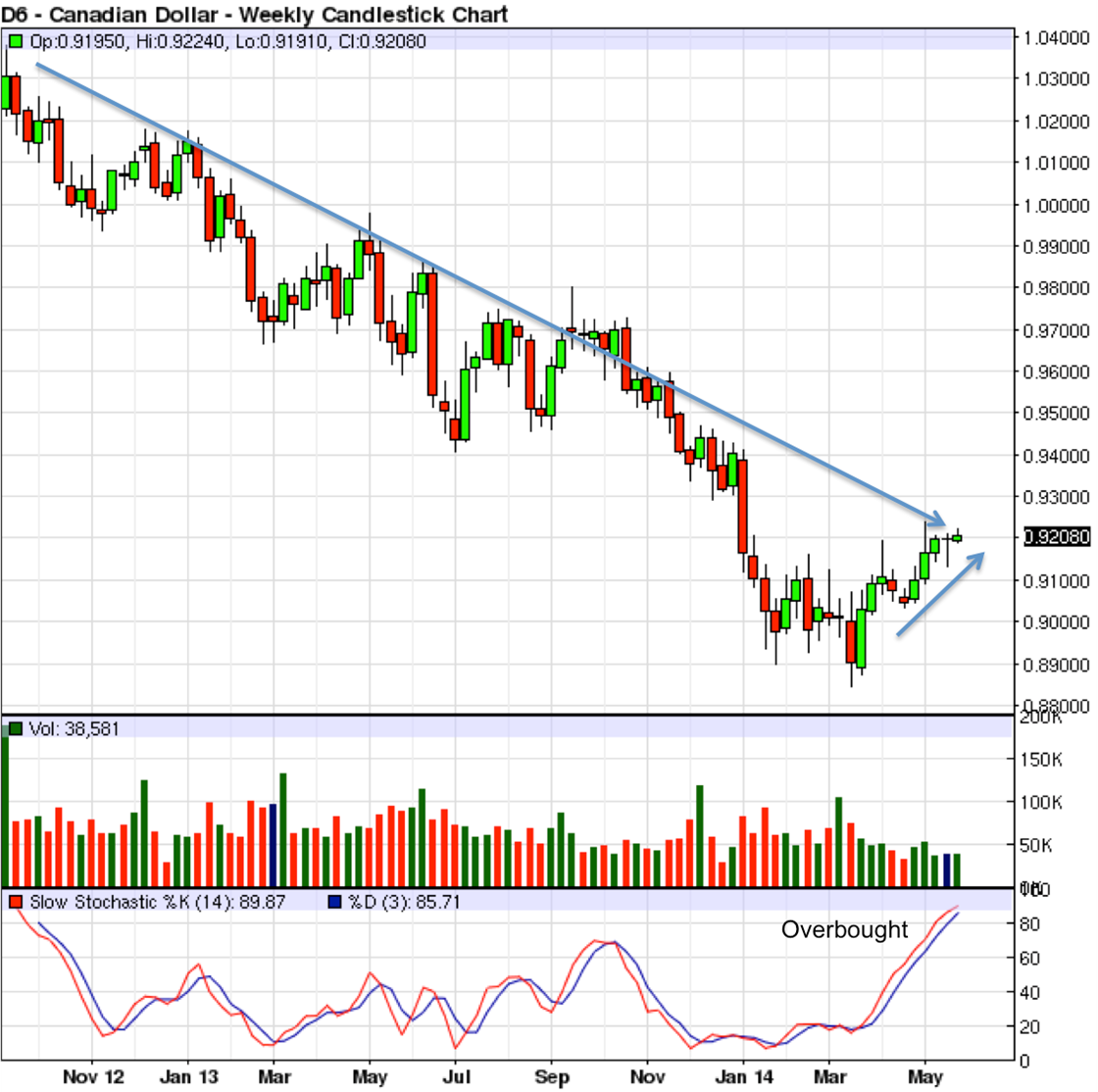