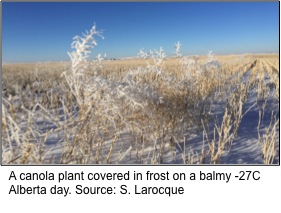 The winter chill has descended upon us as overnight temperatures dipped to -24C this week. We’re still busy soil/mud sampling, which has been a bit troublesome with no frost in the ground and wet snow on top. On the farming front, machinery is now put away, Agri-Trade is done for another year and now it’s now on to the agronomy conference season.

This week’s newsletter will begin with the power and awesome capabilities of earthworms. No, seriously. This is newsletter worthy. Next, we’ll look at what some Argentinians are doing to improve germination and emergence using liquid kits on their planters. Last, I’ll summarize a recent article on compaction and combine them with my thoughts on the seriousness of the issue and what we do going forward. Have a great week.

The backbone without a backbone 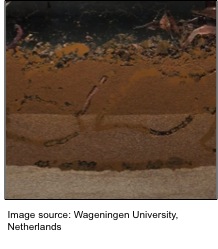 I think we can all appreciate that healthy soil is the backbone of a resilient and profitable farming system. Creating the right environment for soil biology to thrive is key to building healthy, resilient soil. One understood but undervalued asset in our soil are earthworms and the power they have to transform soil.

My friends at Injekta in Australia shared this excellent one and a half minute time-lapse video showing one month of earthworm activity through a glass chamber filled with soil and residue. The worms can be seen digging channels through the soil profile and breaking down surface residue. It is this busy activity of earthworms that recycle nutrients, create stable soil aggregates and build pathways where water and air can flow freely.

There are a few other things they do as well: So, let this be my homage to the lowly earthworm. By zero-tilling, we created the environment for them to thrive. We began continuous cropping to give them enough to eat. Those of you pulling out the plow for the first time in years or using vertical tillage because you think it’s the right thing to do, reconsider. SL

Thanks to Michael Eyres and Injekta for sharing this video created by scientists from Wageningen University, Netherlands.

Source: How earth worms can help your soil

Get a jump on emergence with liquids 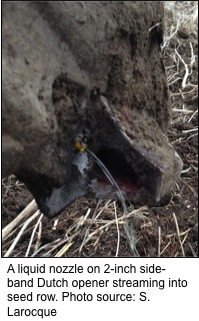 Back in 2012 we added a liquid kit to our Concord air drill to begin testing which liquid products and applications would compliment our CTF, no-till system. Our goal was to help support each plant within the furrow by improving the distribution of products like fertilizer, fungicides, inoculants and soil conditioners. Never would I have thought of simply adding water to the list of products to try, but it appears the Argentinians are on to something big!

A small group of producers in Argentina are using liquid kits on their planters to apply high rates of water in furrow. The high rates of water are enough to initiate germination during periods of dry weather. In some cases they have advanced maturity by 5 weeks over conventional non-liquid seeding systems. A 5-week jumpstart allows plants to establish before the wet season and crops begin to thrive instead of suffer. The water rates in some cases have been up to 1,500 L/ha or 160 gal/ac but don’t let that scare you! We'll run a little Steve’s quick math on a possible scenario for our system. But first, watch the video showing the application and results.

In this example, applying the equivalent of 10mm of water placed in the seed row would be more than enough to initiate germination. At the same time it may act to reduce seedling toxicity caused by granular fertilizer and high salt index. You could also begin to add liquid fertilizer, fungicides, biologicals or soil conditioners to help support the crop as it establishes.

The potential for liquids, in this case water, to compliment dry fertilizer programs is massive for all the reasons I’ve mentioned above. The Argentinians are on to something and we must evaluate how that might fit in our system. If our goal is to support each plant inside every furrow across every acre, liquids are a natural fit due to their evenness in distribution and flexibility of changing products on the go. SL

Facing compaction without getting weird

You don’t have to drive far or search very long to find evidence of serious compaction or major equipment ruts this fall. Intuitively we know that compaction is bad thing for a number of reasons but many are reluctant to face the problem. Instead of going all the way into CTF, which I know you want deep down inside, here are some facts and figures to help you manage compaction beyond the “don’t drive on the field when it’s wet” recommendation. My eyes roll every time I hear that.

If you look at the weights of our common machinery, combines and tractors all break the 10-ton per axle rule, even with dry weights. Load the combine, sprayers and air carts up with product and they are all well over the 10-ton per axle rule where compaction risk is the greatest. It’s kind of scary when you think of it because we’ve been driving around with this equipment for years in moist conditions.

If we think compaction isn’t an issue we’re kidding ourselves. Most of the equipment today exceeds the 10-ton axle limit straight from the factory. The best you can do is manage ground pressure by using low psi radial tires. Go as low as you can go and put as much rubber underneath as possible. For the rest of us weirdos, we’ll keep rolling on tramlines. SL