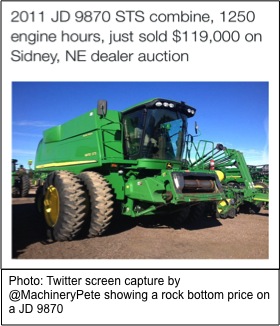 This week I’ve moved offices, otherwise known as “gone on vacation” to Washington and Oregon where winter tires are not required. By the time you read this I’ll have instructed my young family on the virtues of patience during air travel, eaten some fresh seafood and drank a local brew. No holiday wouldn’t be complete without a farm visit so I hope to gather some new and interesting techniques on cover crops and forage production in high rainfall areas. Or, I may simply research the effect of sea air on Prairie agronomists.

Fertilizer prices are currently sitting around $530 urea, $720 MAP, $530 potash and $400-$475 AMS. The largest fluctuation in price among retailers seems to be ammonium sulphate. If you look at the cover photo here, take a look at the details. If that’s any indication of what’s in store for machinery in 2015, it looks like there will be some excellent deals coming our way.

Thanks for all the feedback on the earthworm article last week! My editor-wife questioned my sense momentarily but the volume of video retweets boosted my confidence. And for those of you interested in axle load and how it relates to compaction (which should be everyone), we have an exciting new app in the works that will help you lighten wheel traffic impact. Stay tuned!

In this issue of Beyond Agronomy News I’ll share the details on a uniquely crafted granular herbicide applicator. Next, we’ll look at the impact of CTF on nitrogen mineralization. Last, I’ll finish with an introduction to the best liquid delivery system on the planet. 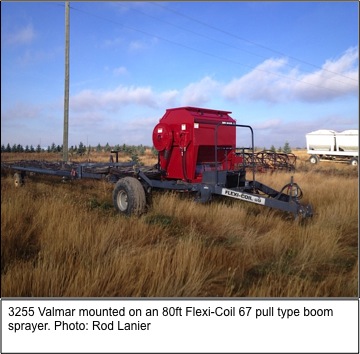 There is a growing demand for granular herbicide applicators in our area. We’ve been successful in reintroducing triallate and trifluralin Group 8 and Group 3 herbicides to our rotation. We broadcast these products on the surface, usually with a Valmarapplicator, just prior to freeze up and allow the snow and next years seeding operation to incorporate the granules. This strategy takes care of the early flushes of wild oats and a few key broadleaves like wild buckwheat so we no longer rely on one big hammer to control large, dense weed populations in crop.

The issue we face now is access to Valmar applicators. With the increase in demand the rental units are either busy or broken and are usually 40-50ft wide and thus brutally inefficient. Custom applicators are charging $4.00 an acre, which adds up quickly and soon justifies the cost of building your own applicator.

Rod Lanier who farms near Lethbridge, AB addressed this issue by building a low cost, high efficiency granular herbicide applicator. The photo above shows a new 3255 Valmar mounted to an old 80-foot, Flexi-Coil 67 pull-type boom sprayer. It carries two mini bulk bags on board, which is enough to do 160 acres a fill and can travel at 12 mph for a total of 115 ac/hr. The cost runs about $13,000 for the Valmar and a few thousand for the old Flexi-Coil pull type sprayer.

To date we’ve had three options to apply granular herbicides. The first is to mount a Valmar on a heavy harrows to manage residue and incorporate herbicides. This strategy works but you often have to heavy harrow first when the weather is warm and then heavy harrow again to apply the granules when the soil cools down to prevent them from activating too early. It doesn’t save a pass but it does a better job than the snow and air drill incorporation method. The second option is the pull-type boom Valmars which are reasonable to rent if you can find one but often too small-scale at 40ft to 50ft wide. The third option is a truck-mounted Valmar, which is typically a custom outfit that costs $4.00/ac, which starts to add up over a large acreage.

The applicator that Rod has built combines low cost with timeliness and efficiency. Best of all, who doesn’t have or know of a pull type Bourgault or Flexi-Coil sprayer sitting on a lot or in the back forty? If we want to keep on top of herbicide resistance, part of the program has to involve multiple herbicide groups and at this time, granular herbicides offer that. So, this winter, perhaps you could pull out that old sprayer that you wouldn’t get anything for and turn it into a moneymaker. Thanks for sharing your idea with us, Rod! SL

How does zero nitrogen sound? 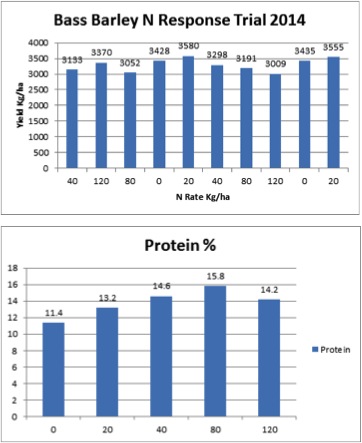 I’ve often been told about the large increases in nutrient cycling inside controlled traffic farming systems. Intuitively, it makes sense that a reduction in wheel traffic and improvement in soil porosity creates a better environment for soil biology like microbes and earthworms to thrive. If you stop squashing their home each year with wheel traffic, eventually they will build up to populations large enough to recycle nutrients quickly. Quenten Knight of Precision Agronomics Australia in Esperance, WA shared some powerful research that outlines the nitrogen supplying power of soils inside CTF.

The graph above shows the results of a replicated nitrogen trial in barley. The field has been in CTF for ten years under a wheat, barley, canola and faba bean rotation. They looked at nitrogen rates ranging from Nil through to 120kg/ha N. The soil tests indicated that the site had N limited yield potential of 2.65T/ha if no N was applied and was soil was tested at three depth increments 0-10cm, 10-20cm and 20-30cm. They measured yield, protein, screenings and grain weight.

The most economical nitrogen rate was 0 kg/ha at 3.4 T/ha with 20 kg/ha coming in a close second at 3.5 T/ha. The lowest yielding treatments were the 80 and 120 kg/ha treatments. Yield went backwards as N rates increased which should be the opposite on a soil with low nitrogen reserves by soil testing standards.

In Quenten’s experience, his CTF clients always have more nitrate N and ammonium N than his non-CTF clients for the same soil types, rotation and management regime. Quenten chalks it up to better soil microbial and earthworm activity. Either way, there is something interesting happening in CTF soils that need to be explored. In the meantime, long term CTF’rs can reap the rewards of building a healthy, robust farming system and reap the savings of increased N mineralization. 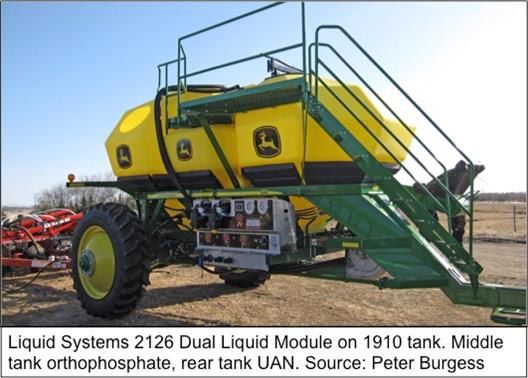 I’ve gotten to know Peter Burgess of Liquid Systems in Australia who owns and develops the most accurate and innovative liquid metering system on the planet. In fact, when I talk about row loading, vertical rate fertility, in-furrow nutrient support and just recently, germination triggering liquids, it all comes back to Liquid Systems technology from Cloverly Park, South Australia.

Take a minute to check out Peter’s Liquid Systems website for some cool inspiration. There’s some great info on vertical rate, strip till and using liquids for more things than you can imagine. See here or here. SL