Fieldwork has come to a brief and perhaps complete halt in many areas after snow fell last week. For us this is a welcome break and just in time for Agri-Trade, Alberta’s largest agricultural show.  Currently, grain is being hauled, malt barley is being re-tested, equipment cleaned, serviced and a few farms are buying fertilizer before year end before a jump in price.

This week we’ll look at how some farms can afford to pay higher cash rents. Next, we’ll look at a new study measuring the effects of tight canola rotations and lastly, I’ll discuss the use of K/Mg ratios for predict nutrient deficiencies.

In spite of falling commodity prices, high input costs and lower insurance coverage from AgriStability, land rents remain at all time highs. I often get asked how an earth farms can bid $85-$100 an acre land rent for land that averages 1.5 T/ac wheat and 1 T/ac canola. It’s possible that some producers just don’t know their numbers, but it’s more likely that high land rent is offset by lower fixed costs, which makes the high land rent still profitable.

The best way to explain this theory is to ‘do the maths’, as the Kiwi’s say. Here’s the low down using a pseudo farm.

This is a very simple but realistic example showing how some farms can justify paying higher land rent. Even though $90 an acre may be a ridiculous bid, the reduction in fixed costs offset the higher priced land rent. At the same time, net profit as a percent remained the same but multiplied over more revenue. In the end, working out scenarios with your own numbers is key to determining how competitive your land bids should be and how much risk that adds to your business. SL

How much do tight canola rotations cost? 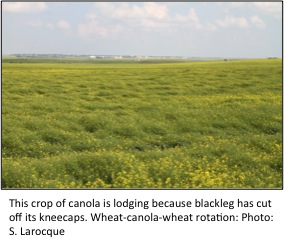 The six-year study compared continuous canola to adding wheat, peas and barley into the rotation. Wheat was the rotational crop for a 1-year rotation break; field peas and barley were the rotational crops for a 2-year rotation break. Crop inputs were applied to achieve optimum yields and canola oil, yield and pests were measured. Both RoundUp Ready and Liberty link varieties were used in the study. Here are the finer details: Steve’s quick math
1 in 3 rotation canola
Yield 1.16 T/ac x $400 T = $464 ac
Inputs: $250
Net: $214/ac

In this short example, a 1 in 2 canola rotation has the potential to net $100 an acre less than a 1 in 3 year rotation when you calculate the added costs of pesticides and the reduction in yield. Throwing more wheat into the rotation may net the same as a 1 in 2 canola but your financial risk is lower.

We know that rotational diversity is key to a healthy and profitable farming system. We have been relying heavily on genetics to maintain yields while we continue to push canola rotations. Someday, genetics will not provide the protection we need and the financial impact will be painful. Until then, I think the 1 in 3 canola rotation provides a good balance between immediate financial gains and the risk of yield reductions from increases insects and diseases.

Is there an ideal K/Mg ratio?

Every once in a while the topic of ideal base cation saturation ratios comes up in conversation. Scientist William Albrecht presented the concept in the 1930’s stating that healthy pastures contained an ideal base saturation ratio of 65% Ca, 10% Mg, 5% K, and 20% H. A soil containing these ideal base cation saturation ratios would have proper soil structure, nutrient cycling and healthy soil biology. The general consensus today in the scientific community is that that there are numerous base saturations ratios to which optimum yields can be achieved. The ratio on my radar and one I use to pin point possible nutrient deficiencies is K/Mg ratios.

A few years ago I ran a study to look at the impact of nutrients and soil quality on yield. We took 400, 1-acre grid samples and overlaid yield maps to find positive and negative correlations between macros, micros, base saturations, OM and pH. The one attribute that showed the highest number of positive correlations to yield was K/Mg ratio. I’ve grid sampled less intensively using the same statistical analysis and K/Mg still showed up as a positive correlation.

Here is the science behind the K/Mg ratio:
Potassium is a highly reactive cation that can build up rapidly around soil roots through active and passive absorption. Meaning, plant roots have an easier time drawing potassium close to the root surface because of its single positive charge compared to magnesium which holds two positive charges. Typically under periods of cold soils, potassium will accumulate around the soil roots. When the soils warm up, the increased volume of potassium around the roots will block magnesium uptake. This can lead to temporary or even permanent magnesium deficiencies in spite of having high soil magnesium levels.

Research presented by A & L Labs using a similar methodology to mine showed a sufficiency range of K/Mg ratios. To calculate these values they simple divided the based saturation percentage of potassium by the percentage of magnesium.

There are a number of theories suggesting which range of K/Mg ratios produce the greatest yield. In my experience, there are a number of ratios that produce optimum yields and each field has its own range. For example, the images you see above show K/Mg ratios on 1-acre grids on a 110 acre field. The image on the bottom shows a close up of the ratios with the blue area producing the highest barley yields. The optimal K/Mg ratio in this field ranges between 0.40 - 0.59. According to A & L’s sufficiency table this would be in the high range, yet it consistently provided optimal barley yields in this field.

The best way to discover the ideal K/Mg ratio is to over lay geo-referenced soil test points with K/Mg ratios over top of your yield maps. From there you can pick out the ideal ranges and see if it is economically possible to correct the deficiencies. In some cases, an application of 10 to 20 lbs/ac of seed placed magnesium may be all it takes to improve Mg uptake. In some cases when you have excessive magnesium, you may be able to seed place potassium to offset any imbalance.

In the end, the question was, do K/Mg ratios make a difference. I would argue that yes, yes they do. Are they worth paying attention to? Well, in the maps above, the difference in yield between an excessive K/Mg ratio at 0.80 to the ideal range of 0.40- 0.59 in this field was 35% or 0.6 T/ac or $115 an acre at current prices.

To begin understanding the balance of K/Mg, look for physical signs of potassium or magnesium deficiencies. Symptoms include early leaf senescence, poor drought tolerance, thin kernels, excessive lodging and physical signs like yellowing leaf margins or red coloration between the leaf veins. Once you start to identify deficiencies, you can then add intensive soil testing, yield mapping and run statistical analysis to arrive at the ideal ranges. SL

Special thanks to Trevor Thorton of CropCare Consulting and Greg Patterson of A & L labs.