We’ve been busy mapping with the Dual EM38, soil testing, meeting with clients and tweaking crop plans for next year. Soil test nitrogen levels, on the average, are low once again. Average wheat yields with proteins above 14% and above average canola yields have kept the nitrogen pool low.

Most producers are busy discing field edges, heavy harrowing, broadcasting granular herbicides and cleaning up equipment before winter. It’s safe to say we’re all ready for a break after 6 months of non-stop operating with little down time. It’s been the busiest season on record followed by the most difficult and expensive harvest. I don’t think anyone would mind an early snowfall but there’s still work to do before we move into the shop. 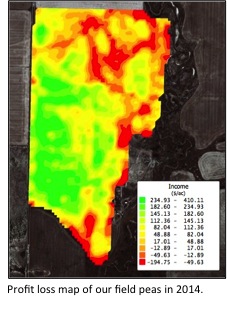 Each year I pore over yield data looking at variability and trial data. Naturally, my eyes focus on the poor producing areas that tell me the red areas yielded x and the green areas yielded y. That information is valuable but it’s not until you turn a yield map into a profit-loss map that you can really start to make decisions.

The image you see here is a profit-loss map showing the variability in our net income across a field of peas in 2014. We have a high of $410.11 per acre net income marked in green to a low of -$194.75 per acre marked in red. The red area works out to 38 acres. Steve’s quick math tells me we lost $7,400.00 on this field this year. I could also take it a step further and generate a multi-year profit-loss map to calculate the income lost over the course of the rotation.

To give you an example, we’ve run some surface drainage scenarios with my good friend Tim Neale of Precision Agriculture Australia who uses Opti-Surface drainage software (best in class in my opinion). In this field it is possible to apply surface drainage to 10 acres to free up the drainage problem on the 38 acres. Let’s run a few numbers on this idea.

The top two pieces of GIS software on the market are SMS Advanced by Ag Leader and FarmWorks by Trimble. They can both help you produce profit-loss maps and help you manage your spatial information. Both are priced around $500-800 CDN for the basic versions and $800-$2,000 for the Pro or Advanced versions. They also offer free trials if you want to take them for a test run. They can take in any OEM data from John Deere, CNH to Claas and AGCO data. I use SMS Advanced because of their awesome tutorials online but both FarmWorks and SMS are very good.

To view a short tutorial on profit-loss mapping in SMS Advanced go here.

Bottom line: If you really want to optimize the production on your land base, start turning your yield maps into profit-loss maps. From there you can run scenarios to help you determine what if any remediation strategies are cost effective. Perhaps it’s surface or tile drainage, liming, deep ripping, gypsum or nutrients. Whatever the cause, profit-loss maps are key to pin pointing the money pits. There’s nothing like staring at a $194.75 loss to make you think hard about how you can turn that into a positive number. SL 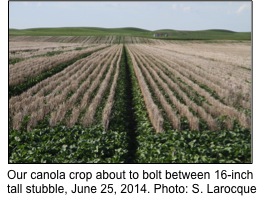 There is always a delicate balance between too much residue and not enough in a direct seeding system. On one hand, residue cover can negatively impact germination and emergence by keeping soils cold and wet in the spring. On the other hand, poor residue cover can allow soils to dry out, reduce tillering and grain fill. A study published this week from Ag Canada confirms the importance of residue cover and serves as a reminder for many who are busy “preparing” their fields with shallow tillage.

The study looked at soil temperature, soil moisture, root length and final yield of wheat, canola and peas between two residue treatments: No surface residue with short standing stubble and heavy residue. The varieties used were InVigor 5440 canola, AC Vista CPS wheat and CDC Meadow peas. Here are the key points: At our farm, we’ve been successfully managing surface residue by keeping our stubble taller when possible and alternating crops with high and low C:N ratios. This balances out the residue load on the surface and the speed at which residue breaks down. This strategy eliminates the need for heavy harrowing or anything else. The photo above is an example of residue management. It shows our canola about to bolt between 16-inch tall wheat stubble. We aim to leave just enough residue to improve moisture use efficiencies but not enough to reduce germination, emergence and yield potential. SL

These are the top two studies on the impact of residue on yields in Western Canada:

Tillage and root heat stress in wheat in central Alberta

Unraveling the mystery of yield potential 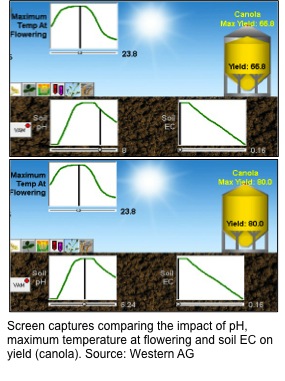 One of the most difficult things in my role as an agronomist is trying to establish maximum economic yield for a given crop on any given field or area. There are so many variables to consider like pH, EC, soil texture, nutrients and climate, nailing down a realistic yield goal is something we do, but don’t really know until after harvest. Even then, did we really reach the full yield potential?

I started trialing a simulation tool called PRS CropCaster, which helps predict maximum yield and maximum economic yield based on attributes like heat units, soil texture, soil moisture, rainfall, pH and background nutrients. The model is powered by countless response curves based on Western Canadian crop production research. The beauty of the model is that it allows you to dial the attributes I just mentioned up or down to see how each one impacts yield potential.

To give you an example, I’ve run a few simulations showing the impact of pH on canola yield from a field of ours. The images above are small screen captures showing the impact of pH, maximum temperature at flowering and soil EC. Missing from the image are soil texture, soil moisture, rainfall and nutrients. The graphs in the bottom left corner show the yield response curve for canola and pH. Based on the soil test results the model suggests my maximum yield potential on a hilltop is 66.8 bu/ac. If I dial back the pH from 8 to a pH of 6.2, my yield potential climbs from 66.8 to 80 bu.ac, a 13.2 bu/ac increase. From here I can begin to adjust my NPKS and see how each nutrient impacts yield potential and fine-tune my maximum economic yield.

So far I have been fairly impressed with the PRS CropCaster model and its ability to point out the soil or climatic limiting factors. For example, I can run scenarios to predict the impact of liming on yield if I were to raise pH by 1. It becomes easier to run an economic analysis to see if lime is cost effective. The same goes with nutrients as I use it to run scenarios to find out where my maximum economic yield lies for each crop on each field based on their own unique characteristics.

Like any model, the outcome isn’t perfect. What it does provide is some scientific modeling to predict maxiumum economic yield. To date, we’ve all been using the SWAG or scientific wild-ass guess method. I do believe the future is in modeling like the PRS CropCaster where we can start to predict outcomes based on real time information. This type of modeling is a big leap forward. SL